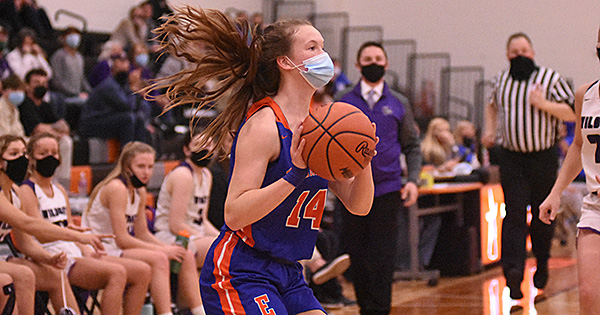 DOWAGIAC — The road to the Division 2 Regional Tournament has run through either Edwardsburg or Three Rivers each of the last four years.

So, why should Friday night’s game be any different? The Wildcats and Eddies, who do battle twice a year in the Wolverine Conference, have now decided the Division 2 District championship five consecutive seasons.

Heading into Friday night’s meeting at Dowagiac Union High School, both teams had won two titles. Three Rivers got the best of Edwardsburg last season with a 48-37 victory before COVID-19 shut down the state tournament during the week of regionals.

Last Friday night, the Eddies were determined to take back their title from the Wildcats. The two teams slugged it out for almost 30 minutes before Edwardsburg went on a 12-0 to end the game.

The result was a 66-55 Edwardsburg victory over Three Rivers and a spot in the Division 2 Regional, which the Eddies are hosting starting Monday. Edwardsburg (11-3) will take on undefeated Buchanan (13-0) at 5:30 p.m. in the first semifinal. The second semifinal, at approximately 7 p.m., will pit Wolverine Conference champion Plainwell against Wayland.

With the Wildcats holding a 44-42 lead heading into the final quarter, Edwardsburg Coach Jon Pobuda decided to make a defensive change.

“We pulled the pressure off,” Pobuda said. “We wanted to just get our rotations on defense and then apply pressure on offense get up and down the court. Usually, they come out, break the press and get some easy baskets and momentum. We sat back. They hit some shots and got some momentum, but our girls kept battling.”

The Wildcats and Eddies traded baskets and the lead throughout the fourth quarter. Three Rivers led 55-54 with just under two minutes remain when the Eddies went on their game-winning run.

Poduda said it was not about revenge when it came to winning the game, but having to be ready to face the challenge of playing Three Rivers year in and year out for the title.

“It is always important no matter when we play,” Pobuda said about facing the Wildcats. “Revenge, or call it what you want, you know, it seems like this is something that just has to happen every year. I will take the revenge if that is what you want to call it. They are a tough team and our girls battled all night.”

Edwardsburg used both its perimeter game and went to the basket to score points against the aggressive Three Rivers defense. Averie Markel got the 12-0 going with a 3-pointer, while Macey Laubach battled in the paint for everything should could get, including going 4-for-4 at the free throw line down the stretch.

“They just kept knocking down shot after shot,” Pobuda said. “It was like eventually, they would have to miss something. At the end, we were able to come up with some stops, some big rebounds, and we knocked down our free throws when it counted.”

Katie Schaible led the Eddies and all scorers with 19 points, which included five 3-pointers. Ella Castelucci added 13 points, while Laubach finished with 11.

BRIDGMAN — The Brandywine boys basketball team had tough sledding against a senior-laden Schoolcraft squad. The Eagles jumped out to... read more