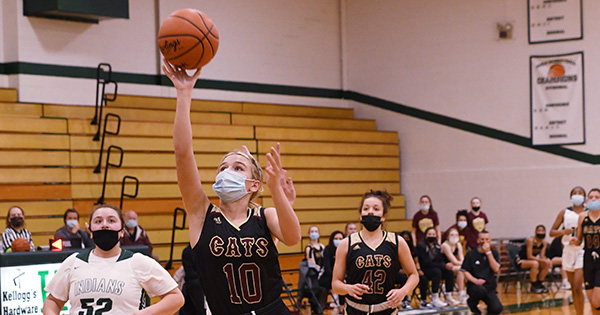 A 10-2 Hartford run in the fourth quarter propelled the Indians to a 36-28 win over the Bobcats in Division 3 district finals at Hartford.

Hartford’s win gave the Indians their first district title since 2013, while Brandywine’s loss snapped a district championship streak that began in 2015. The Bobcats have appeared in 12 straight district title games, winning 11 of them.

“You can’t score 28 points in a district championship game,” said Brandywine coach Josh Hood. “We had every shot we wanted. We’ve got to be able to put the ball in the basket, but these are the games you have sometimes.”

Brandywine led 6-3 after the first quarter but scored just two in the second as Hartford took a 11-8 lead into the locker room. The Bobcats’ defense stymied the Indians in the first half, but the Bobcats were unable to produce offense of their own.

“We gave up 11 points in a half of a district championship game and were still down at halftime,” Hood said. “A lot of credit goes to Hartford. Coach Olds did a great job and their girls played really hard and played a great defensive game.”

The Bobcats struggled in the post against Snodgrass and the Hartford defense but were unable to knock down 3-pointers to open up the paint.

The Bobcats trailed by as many as 11 in the fourth before a Marigrave Foster basket keyed a 6-0 run to trim the deficit to 31-26 with just under four minutes remaining. But the Indians responded by attacking the basket and getting to the free throw line to the tune of a 5-0 run, putting the game out of reach.

“Our girls are good enough to win every game they’re playing,” said Hartford coach Jamin Olds. “You have to build that confidence and they bought in. (Brandywine) is one of those programs that you want to beat with the rich tradition they have over there. It was fun.”

Hartford advances to face the winner between Gobles and Bloomingdale in Division 3 regional semifinal play at 8 p.m. Monday at Watervliet High School.

Hood is proud of his team for embracing the challenges it faced this year. The young Bobcats graduate two seniors this year and aim to return to the district finals next year, albeit with a different result.

“We lost five of our top six girls from last year,” Hood said. “These girls persevered. People didn’t think we were going to win a lot of games because we had so many freshmen playing but I thought we did a really good job to finish 10-3. It hurts tonight, but as we like to say, tradition never graduates. We’re going to move forward. The future is bright for this program and I’m really excited about the girls we have coming back and the girls coming in.”

POKAGON TOWNSHIP — A local church nestled in Pokagon Township played host to the debut one of the world’s most... read more