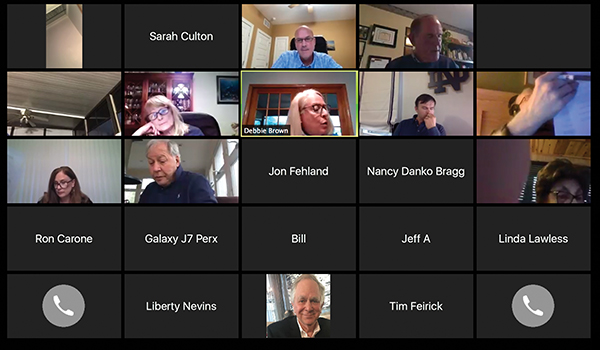 Wednesday evening, the Silver Creek Township Board met to discuss short-term rentals, which encompass vacation rental properties advertised on websites such as Airbnb. It is a topic the commission has been tackling for the better part of a year. After two hours and several public comments, commissioners voted to consult experts in the area on the ordinance for additional feedback. The vote passed unanimously.

“This would give us some guidance on which way we should go on this,” said Commissioner John Joosens.

Prior in the meeting, a vote to appoint an ad hoc committee made up of community members failed in a split vote, with Nick Barnes, Mick Braman, Tim Feirick voting yes, and Terry Harris, John Joossens, John Tidey and Debbie Brown voting no.

The planning commission has been tackling the topic of a short-term rental ordinance since August of last year. Short-term rental regulations have been controversial across the state and country in recent years as those properties fall into a grey area between residential and commercial property. The controversy is reflected in Silver Creek Township, with property owners expressing displeasure with proposed regulations through many meetings and two public hearings hosted in the last year. Most recently, the planning commission voted in its February meeting to table an ordinance proposal reading after more than 90 individuals attended a public hearing conference to voice their concerns, and a petition containing more than 1,000 signatures was presented to commissioners.

Despite an ordinance’s unpopularity, Township Building and Zoning Administrator Todd Herter said an ordinance is necessary as short-term rentals are currently illegal in the township, as they are not permitted in a single-family zoning district.

Silver Creek Township’s proposed rental ordinance, which was read at Wednesday’s meeting, defines short-term rentals as a property renting for compensation between three and 27 nights. According to Herter and Planning Commission Chair Terry Harris, the limit of 27 days was set to comply with state-level regulations on residential zoning.

The ordinance would require all short-term rentals to register with the township; consent to inspections; maintain a maximum occupancy of no more than 10 total occupants or two individuals per bedroom, plus one individual per finished story; be insured as a commercially rented property with a liability policy of at least $1 million; maintain quiet hours from 10 p.m. to 7 a.m. To enforce regulations, the ordinance imposes fines for infractions:

The ordinance, its restrictions and its fines split both community members and commissioners at the meeting. Some argued for more rental days and fewer regulations, while some argued for no restrictions at all, saying limiting short-term rentals will hurt the Sister Lakes economy.

However, some were in favor of instituting an ordinance to both comply with the law and ensure residential and commercial remains balanced in the area.

Several property owners also took issue with the planning commission voting down an ad hoc committee of community members to consult on the issue.

“The fact that you voted against this committee speaks volumes,” said resident Teri Carone. “You give us the opportunity to speak, but it goes nowhere. There has to be a debate about these things. You have to hear our side of it, as the short-term rental owners.”

Though the vote to create an ad hoc committee failed, Chair Harris encouraged the public to continue communicating with the planning commission through letters and public comment at meetings.

“Right now, we are moving forward are putting together some quote-unquote experts to help us look at this,” he said.

NILES — When the Niles girls basketball team faced off against Three Rivers on March 5, the end result was... read more