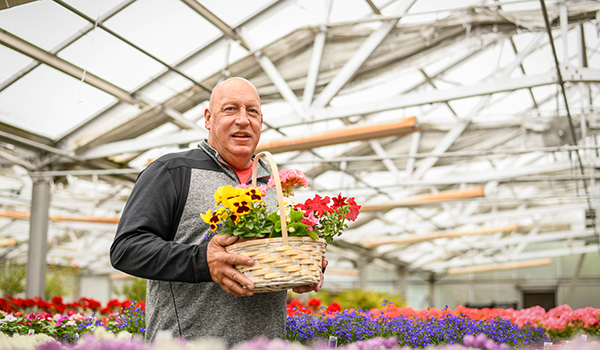 NILES — A local business planted in Niles 100 years ago continues to bloom in 2021.

East Main Gardens, located at 1521 E. Main St. in Niles, is owned today by Mike Peters, who got his start in his family’s business by tying ribbons for flower arrangements as a young adolescent.

On Tuesday, March 30, during regular hours, East Main Gardens will celebrate its centennial anniversary. The shop will have cake to mark the occasion and host a giveaway for a year of monthly flower arrangements. Guests will need to come to the shop that day to enter the giveaway.

Mike is excited to celebrate the 100th anniversary of East Main Gardens with his family and
community.

Entering the business, twin cats welcome guests into the shop. Among the lush bouquets of flowers in the retail area, there are family photos displayed over mantles.

March 30 is a significant date for the Peters family. The business began on March 30, 1921, when Mike’s grandfather, Milfred, sold the first flowers from his wife, Nellie’s, greenhouse. Nellie was in the hospital, due to give birth to Mike’s father, Roy. Nellie was a plant-lover, and had Milfred move her beloved plants and greenhouse from their original home in Sand Creek, Michigan, to Niles when they moved for him to take a job with the railroad. Nellie had sent Milfred home to make sure her plants were watered.

When he returned to the hospital, Milfred told Nellie, “I’ve got some good news: the flowers are beautiful, just like you. The bad news is that I sold one.”

March 30 remains an important day to Mike as the anniversary for East Main Gardens, and as his parents’ birthdays.

Mike began working at East Main Gardens as an adolescent.

“It was something my grandparents enjoyed doing,” Mike said. “They had 11 kids, so all of the kids grew up in the business, working and doing their part.”

Mike graduated from high school in 1974, and shortly after took on more responsibilities in the shop including buying and designing.

“I was a designer when I was born because I always made arrangements as a little kid,” Mike said. “My mom used to have a stool in the back for me to stand on and make arrangements.”

Sitting in his shop this week, Mike recalled a time he helped his father deliver flowers before a wedding. He carried the arrangements into the church, and as his father was hanging the aisle runner, he told Mike to go wait in the car.

As Mike was turning to leave, he found money on the ground and picked it up. When his father returned to the car and found Mike counting the money, he asked if Mike had taken it.

They went back inside with the coins, and Mike’s father realized the coins had been placed on the floor in front of the alter so the bridal party and groomsmen knew where to stand.

“We had to try to remember where the quarters and nickels went,” he said with a laugh. “Hopefully, the bride married the groom and not the best man.”

Memories of the family and East Main Gardens’ history fill the shop.

Mike points out photos of parade floats from the 1950s, from the Niles Rose Bowl Parade, where the family had handcrafted a rose covered float to commemorate the occasion. Large family photosand photos of the business’ bowling team speckle the walls. A book on the front desk with a pressed title “Peters Garden of Memories” includes family photos, typed up special memories and past advertisements.

One of the original signs from the business sits behind the counter, denoting a four-digit phone number: 1018.

Mike also remembers when the shop went from a rotary telephone to a push button phone. Without having to wait for the rotary to return after each number, he was able to place orders to Florists’ Transworld Delivery around the country much more quickly.

Mike has four grown children of his own with established careers in other industries. He has nine grandchildren, and hopes one of them will step into the floral business with him someday.

Family has played an integral role for East Main Gardens in Niles, but so have the connections Mike has made.

“I think I have just kept up the family tradition of being in service and taking care of people. The best customer is a return customer,” Mike said. “For being here for 100 years, we must have done something right to keep the customers coming back.”

SILVER CREEK TOWNSHIP — A Niles man was killed in a  Silver Creek Township crash Friday evening, according to the... read more