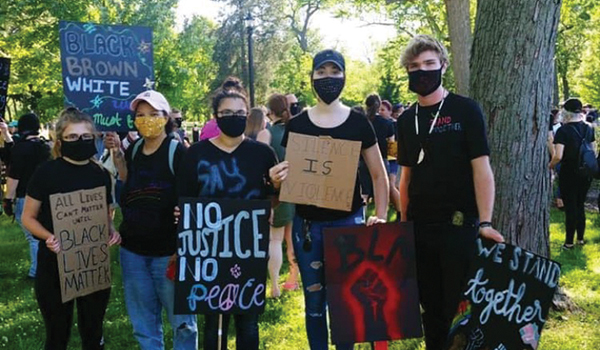 Serynn Nowlin, 17, second in from right, had a piece published in The New York Times as part of its Learning Network program. Published in a collection titled, “Coming of Age: Teens on a year that changed everything,” Nowlin’s piece was about a moment at a protest she attended. (Submitted photo)

BUCHANAN – A Buchanan High School senior had her work selected to be included a special print section of The New York Times.

The section was a part of the newspaper’s “Coming of Age” in 2020 reflection. The pieces, collectively, were titled “Teens on a year that changed everything.” Serynn Nowlin, 17, of Buchanan, wrote a submission titled “The Right Side of History” about a Black Lives Matter march she attended.

Whenever she has a class complete the prompts, she encourages them to submit them.

“I want to give them a chance to share their voice outside of my room,” Neal said. “I like that the Learning Network gives them the opportunity.”

Nowlin said she enjoys the chance to write for prompts like this one.

The prompt, according to The New York Times Learning Network website, said that “whatever [students] send must somehow relate to the local, national or global news that affected our lives in 2020, even if that connection is subtle.”

“[Neal] gives us a lot of different opportunities,” Nowlin said. “There are typically a few annual competitions. This one was new for 2020.”

Nowlin’s published piece was just under 100 words, describing her experience attending a Mishawaka Black Lives Matter protest. She said throughout the quarantine in 2020, she noticed her views on society changed.

“I became really active in politics and social justice issues,” Nowlin said. “It had culminated in that moment.”

Initially, her parents would not let her attend the march. However, when a friend’s parent offered to take them, they relented.

“It was still nerve wracking because of all the different opinions of the public, and my family didn’t want me to go,” Nowlin said. “I just felt like I could not sit and not do anything for any longer.”

Being a part of the march with its energy and presence inspired her. She recalled a moment when the protestors began marching back from the Mishawaka Police Department station to the park it began at, and a small child took control of the megaphone and led chants.

She submitted her piece to The Learning Network and was one of more than 5,500 responses it received.

A classmate, Erin Chase, was another finalist for a piece titled “FaceTime?” Chase’s piece was not chosen for final publication, but was included in the list of 245 finalists.

Nowlin found out her piece would be in print as a featured finalist through an email.

“I have a few copies [of the newspaper] on the way,” Nowlin said. “I ordered a few.”

Neal also has copies of the newspaper ordered.

“I’m so proud of both of them,” Neal said of Nowlin and Chase. “Not all students take it to heart.”

Neal said she worked with Nowlin on perfecting her submission.
“She knew it could be read by others,” Neal said. “We did multiple drafts. I feel so blessed to be her teacher.”