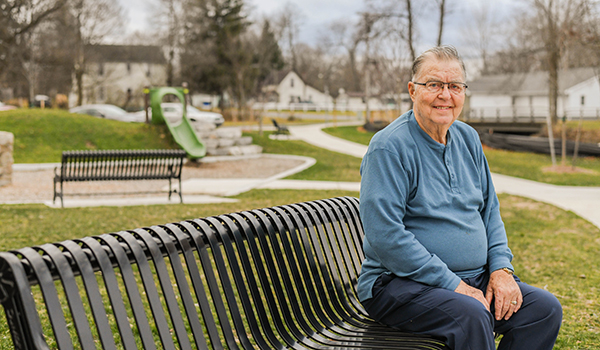 Nestled next to the Dowagiac Creek is a quaint space, a space where folks can escape the hustle and bustle of their everyday lives to take a walk, be hypnotized by the steady stream of flowing water, play with their kids or to just sit in their car and have a moment to themselves. Schuur Park is that space, much to the delight of its namesake, Dowagiac city councilman Bob Schuur. Schuur, the longest-serving council member in the city’s history with 36 years under his belt, was honored with the dedication of Schuur Park in 2019.

Friends, family and colleagues celebrated Schuur’s achievements at the newly-established park at the dedication ceremony.

“The dedication of the park was wonderful,” Schuur said. “[City manager] Kevin Anderson does a great job with the city as does mayor Don Lyons. They come up with a lot of wonderful ideas for the community.”

The decision to name the park after Schuur was an easy one for Dowagiac Mayor Don Lyons, who was inspired by his father Dale A. Lyons and the late Dr. Fred L. Mathews, individuals who played integral roles in the founding and development of Southwestern Michigan College. Both have buildings named after them on SMC’s Dowagiac campus.

“I was born and raised here,” Lyons said. “My family has very deep roots here. My father was heavily involved in the community. One of the things SMC did that I liked was that buildings were named after individuals who gave time and effort to public service. I tried to carry the practice on. Bob has served more than 30 years and is the longest-serving member. We felt it was appropriate that his service be recognized.”

The park, located on Cass Avenue adjacent to the Dowagiac Creek, offers visitors a fishing pier, play equipment and resting benches. Schuur said that the area used to be a popular spot for the city’s youth to take a plunge on a hot summer day.

“Did you know that stream is a trout stream?” Schuur said. “The water starts in Coldwater and flows through here.”

Spending primarily grant money awarded to the city by the state of Michigan, the city broke ground on the development of the park in September 2019 and finished before the end of that year.

“Dowagiac has a number of parks,” Lyons said. “We’re always looking at opportunities to expand that number. We came up with the idea to utilize an asset of our community. With that in mind, we came up with the notion of establishing a park where Cass Avenue crosses the creek.”

“It felt good to name it after someone like Mr. Schuur,” Anderson said. “He has shown his dedication to the community over the course of his many years of service. The response has been tremendous. You like working on something that has filled a need in the community.”

Schuur first took office Nov. 18, 1985, and has overseen many important city projects over the course of his career, including the  relocation of M-51 in the downtown and the reconstruction of the downtown streetscape; the demolition of the former Dowagiac Middle School and its redevelopment into the downtown Lyons Health Center; relocation of the Dowagiac Area History Museum; the purchase and continued development of Russom Park; the purchase of blighted property across from Dowagiac City Hall and its redevelopment into the James E. Snow Building; and improvements to numerous structures at Riverside Cemetery.

According to Schuur, the restructuring of downtown Dowagiac was a tough task the city had to undertake.

“There were a lot of people who did not want that done,” Schuur recalled. “Some of the merchants felt that if the people traveling did not travel through downtown, they would not stop and buy. But it turned out to be a blessing because we now control the street. It’s a city street and not a highway. Now when we have a parade or a festival, it is much easier to coordinate.”

Schuur began his professional career working for what was then Lee Memorial Hospital at the age of 17. He worked there for 55 years and said that was where his passion for helping people ignited.

According to Schuur, working with the Sisters of St. Joseph at the hospital left a significant impression on him, even if he was doing busy work.

“I’ve got a real love for them,” he said. “When I first started, I was 17 and had a driver’s license. The nuns were not allowed to drive and they always had to be in pairs. They had me take them everywhere. I had lots of fun, and they always fed me when it was lunchtime.”

Schuur has also been on the Dowagiac Cemetery Board for all of the years that he has been on the city council. In addition to helping the city, Schuur aims to make sure that the final resting place of the community’s loved ones is well taken care of. He visits the cemetery often, taking different routes every time to document things like fallen tree limbs and damaged tombstones. It is the little things like this that have allowed Schuur to have the lengthy career he has.

“If I notice anything that needs to be addressed, I bring it up during council meetings,” Schuur said. “The cemetery is very important to me. All these years, I’ve followed through and try to do my part to make the cemetery a better place. It’s been nice.”

Entering his 36th year of service, Schuur aims to continue to serve the community he loves so much. He donates extra time to First Christian Church in Dowagiac as well as the city’s beautification committee.

“I just wish my mom could be here to see what happened to the city and that her oldest son had a park named after him,” Schuur said. “Most of the time when things are named, people are dead. I am humbled and grateful.”

Diane Barrett-Curtis describes her sewing room as “organized chaos.” Located at the top of a tall staircase inside her Dowagiac... read more