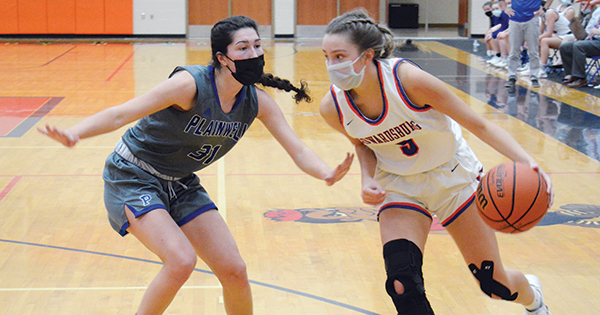 EDWARDSBURG — It just was not meant to be.

After trailing for most of the game, the Eddies made their move in the fourth quarter. An Ella Castelucci basket down low put the Eddies up 38-37 with two minutes remaining in the contest. Following a Maya Johnson 3-pointer for Plainwell, Castelucci was fouled while shooting and made 1-of-2 free throws to trim the deficit to 40-39 with just over one minute to play.

Down 43-41 with seconds remaining, the Eddies had chances to tie or take the lead but could not get shots to fall.

The defeat is Edwardsburg’s (5-3, 5-2 Wolverine) second straight following a 50-39 loss to Three Rivers on Monday.

“From the start, we were out of sorts,” said Edwardsburg head coach Jon Pobuda. “It took us all game to get into it. We were right there in the end, and it seemed to be that way all night. We were just a step slow, and they brought their game today, and they made us work. We battled as much as we could, but we just weren’t able to match their energy.”

Plainwell’s Allie Hawkes led all scorers with 14 points, and Lauren Vanderstelt added 12. Katie Schaible and Castelucci scored 13 points apiece to lead Edwardsburg. Castelucci single-handedly willed the Eddies back into the game, scoring 11 of her 13 points in the fourth quarter.

“I wish everyone had her heart,” Pobuda said. “She gives us so much, and she’s playing hard. She’s nonstop. She just goes, and she gets her hands on a lot of balls, and she gets a lot of rebounds for being undersized. She is everything that you want out of a kid. She gets after it and creates a lot of problems for the other team. We have to get everybody to match her intensity. If we do that, we’re gonna be good.”

The Eddies scored just five points in the first quarter and found themselves in foul trouble early and often. Macey Laubach picked up her third foul midway through the second quarter and was forced to sit the rest of the half. Trailing 18-15 entering the third quarter, she picked up her fourth foul early in the second half and did not return to play until the last few minutes of the game.

“We needed to do a better job of taking care of the basket,” Pobuda said. “We had too many turnovers and defensively we gave up some easy baskets and had a lot of bad fouls. They were on the line a lot tonight and you can’t win a game putting them on the line. But we had our opportunities. We took 58 shots and they took 32.”

While the Eddies will not be adding a conference title banner to the rafters this season, Pobuda believes the team has what it takes to make a postseason run.

“Our focus has to be on the postseason,” he said. “We have to get ready for districts. We’re not done. We have a good squad. I really like our team, and I like where we’re at. We just need to clean some things up, and we’ll be okay.”

NILES – At Monday evening’s Niles City Council meeting, council members will vote on whether to approve or reject the... read more