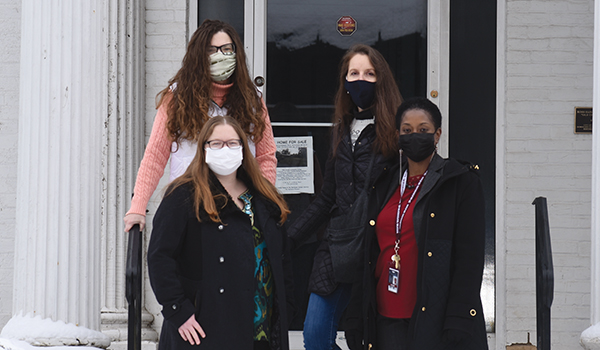 Walking along its sidewalks lined with charming brick buildings, many would think Buchanan was “nice” — a nice little town with nice little shops filled with nice people.

“Nice” was certainly the adjective settled on by Reader’s Digest, which named Buchanan “The Nicest Place in America” for 2020.

However, leaders of a local nonprofit organization want Buchanan to be more than nice. They want their city to be the “most diverse, welcoming and inclusive place in America.”

Founded in 2017, One Buchanan is an organization aimed at promoting diversity and making Buchanan into a place that welcomes people of all races, nationalities, socio-economic statuses, religions, and sexual and gender orientations. During its life span, the group has hosted community dialogs and educational campaigns, as well as helped promote a 2019 non-discrimination ordinance.

In January 2021, the organization furthered its cause as the Buchanan City Commission voted to recognize One Buchanan as an official city board to increase inclusivity and recognize diversity within the city. With the action, One Buchanan committee members believe the city has taken steps to ensure diversity and inclusion remain core to the city’s identity.

Founding member Rev. Sid Mohn said One Buchanan was inspired by similar movements in cities such as Boston and Chicago to promote unity and diversity.

“We wanted to declare that hate has no home in Buchanan,” Mohn, 72, said. “We wanted to say that we are one Buchanan that celebrates diversity and works toward unity and understanding.”

Committee member Monroe Lemay said she got her start with One Buchanan after Mohn approached her, the Buchanan Area Senior Center’s then-director, about a support group for LGBTQ seniors. That conversation morphed into wanting to create an organization that supported all marginalized communities in Buchanan — an organization that welcomed all residents regardless of age, race, gender, ability, sexual orientation or place of origin.

“We started to say rather than being a support group, while that certainly could be a part of that, we wanted to provide an educational aspect,” Lemay said. “Whenever you introduce something new to the community, you need to educate. You can’t blame people who don’t do  something because they weren’t taught properly. What you can do is be a leader and a teacher and show people there is a better way.”

Since hosting its first forum in 2018, both Mohn and Lemay said they had been pleased with the reaction from the Buchanan community, many of whom have been eager to learn and understand the history of diversity in the city. According to Lemay, roughly 100 people attended the organization’s first forum. At its last forum, that number grew to nearly double.

“This is helping people find the missing puzzle pieces,” Lemay said. “This is a way to connect people and bring awareness that we do have minorities here. … It really is bringing people together as a community.”

Not content to stop while ahead, the One Buchanan executive committee grew to include representatives from all community branches. President Heather Grace represents the city government as the Buchanan city manager, and Vice President Patricia Robinson represents the school district as Buchanan Community Schools superintendent.

As the local school district leader, Robinson said she was drawn to the educational aspect of One Buchanan, believing the organization’s mission to be an important one to prepare her students for the outside world.

“It’s always good to promote embracing marginalized groups,” Robinson said. “At the schools, we are tasked with providing an environment and culture of safety, diversity and support for our students, and I think [the values of Buchanan] can really prepare students for the world. It helps them be well-rounded and to understand other people’s races and diversity groups. It helps make sure people feel welcomed and included. Overall, it’s for the greater good of our country.”

Being a recent transplant to the Buchanan community, Grace said she was almost immediately drawn to One Buchanan. As city manager, she hopes to promote the group’s message of diversity and inclusion to the entire community.

“It’s important [as a city] to provide quality services to your citizens — and that means all of your citizens,” Grace said. “We need to be reaching a diverse group of people, knowing what their needs are and making sure those needs are met. We can’t do that unless we have a diverse set of voices at the table, and I think this is a great way to get our voice out there and say, ‘we want to be inclusive and embracing diversity.’”

Now that One Buchanan is officially a city board, committee members said they were excited for what the future holds and hope to continue to promote the organization’s values to make Buchanan the most welcoming city it can be.

“I think this brings the city government to the table directly,” Mohn said. “I think this is another illustration of the city deepening its commitment to its values of diversity, not just in words but in structural ways.”

Going forward, Grace said the city would promote One Buchanan as a city board by advertising meetings and minutes on the city’s website. While some of the details of the city’s involvement in One Buchanan are still being ironed out, Grace said she hopes that, in the future, the city could provide some funding to the organization and help it secure grant funds to aid in its outreach.

“We are really looking to expanding the accessibility and outreach and what [One Buchanan] can accomplish,” Grace said. “We have to embrace diversity if we want Buchanan to grow.”

In the meantime, One Buchanan committee members said they would continue on their mission to make Buchanan “more than nice.”

“We all have a passion for this town, and we all believe Buchanan is already a great place to be,” Lemay said. “I want to make sure that in the future, everyone feels that way. We want to focus on making Buchanan even better.”

In the three southernmost counties in southwest Michigan, nearly 700 children are in foster care. Removed from their homes due... read more