When Amanda Leonard, of Niles, became engaged over Christmas 2019, she was excited to begin planning her and her fiance’s wedding. They picked out the perfect venue, the Grand LV, in downtown Niles, and found a photographer who fit their style just right: Shayne Culp Photography. Choosing catering, invitations and making the guest list soon followed in the course of planning for their big day in November 2020.

Wedding planning can begin years in advance. Selecting every perfect detail from the venue, working on the guest list, finding “the dress,” finalizing “the look,” planning with wedding parties, hiring a photographer, setting a menu… the list of to-dos can go on and on.

In March, on the cusp of southwest Michigan’s spring wedding season, COVID-19 mandates shut down in-person learning for schools after March 13, and went on to include gatherings, restaurants and bars. Initially just for two weeks, the shutdowns grew longer and longer.

Leonard said she stayed in contact with the owner of the The Grand LV, Melanie Kennedy, to work through the mandates and expectations together.

“We were up to 230 people coming our wedding, and then in May, our final payment was due for the venue,” Leonard said. “We were super worried about that. We went ahead and paid, and hoped that COVID was not going to be a thing in November.”

She said speaking with Kennedy about the changes and continued uncertainty helped allay some anxieties.

“Her and I were in constant communication,” Leonard said. “If COVID-19 were to get worse, she was super flexible.”

According to The Wedding Report, a research company and website that publishes forecasts and data on the wedding industry, 21 percent of couples surveyed opted to postpone their weddings to later in 2020. Forty-one percent surveyed moved their dates to 2021, and 7 percent opted to cancel the formal event altogether in lieu of the COVID-19 pandemic.

Ultimately, Leonard married her fiancé in the fall on their originally planned date, with a much smaller wedding and reception than they had hoped for.

“We wanted to protect our grandparents and have them be a part of the day, and not be worried about the extra people at the wedding,” she said.

The guest list was cut down to the 50 people closest to the couple.

Leonard’s was not the only wedding Grand LV owner Kennedy had to adjust in the wake of COVID-19 mandates. With a wedding on the books in the first weeks of shutdowns, Kennedy’s season has been one roadblock after another. Despite the hurdles, she said she still has been working to make brides’ dreams come true. 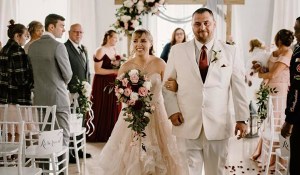 “[The bride] was panicking,” Kennedy said. “I would never cancel a wedding the day of. I let her know as soon as I could that she was still getting the space.”

As the mandates were interpreted by Michigan residents, Kennedy moved forward with the bride’s wedding before contacting all following to reschedule until the state allowed the space to re-open to host events.

The event venue, near the heart of downtown Niles, breathed new life into a space that originally was built to be the Elks Temple in 1928. The space has survived, retaining much of its original beauty, through many other national crises including The Great Depression, World War II and more.

Opening an event space was not Kennedy’s dream, but she and her husband had seen the beauty of many buildings in downtown Niles and wanted to breathe another life into them.

“It was solely by accident,” Kennedy said of becoming a wedding venue owner.

When the Kennedys walked through the space before purchasing it, they were moved by the space’s potential.

“We were blown away by how glamorous it was, especially the top floor,” Kennedy said. “We had big dreams for the space. We wanted to bring it back to life. It took off quicker than we could have imagined.”

As the space kept booking, and the renovations continued, Kennedy decided to dedicate her full energy to the new venue and left the salon business.

“A lot of times, I’m the janitor and the event coordinator,” she said.

She likened wedding bookings to clients in a salon. Some brides are very hands on and involved in the smallest details, while others simply want the day to unfold at its own pace. 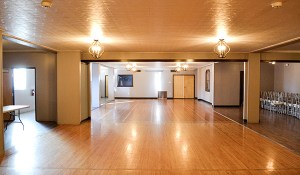 “Some clients will leave with wet hair, and others, one single hair out of place hair bothers them,” she said.

In the same way, weddings have continued to book, and couples have different needs and visions for the space.

During the heaviest COVID-19 state mandates, The Grand LV was effectively closed for four months. The venue’s bridal suite was empty of laughter and hairspray. The downstairs reception space hosted no first dances. Celebrations ceased within the building. All the while, Kennedy fielded questions from couples concerned about their event and wedding dates.

The first event back in the building of a traditional size was a wedding of 100 attendees, for a bride and groom who were originally scheduled to say their “I dos” in May.

Like all weddings hosted since shutdowns began, that party had to adapt to safety precautions and spacing. A box of paper face masks sat at the entrance of the ceremony and reception areas, while hand sanitizers were strategically placed on the tables and throughout the space.

“You would have never seen that before,” Kennedy said.

Photographing events changed for Culp as she worked on weddings through the Michiana area in 2020 as well.

Culp took the leap into being a full-time photographer in 2020, and learned what that meant as it changed with each week.

Culp said she does not have to worry about hosting crowds as a venue owner would. Instead, she has only had to ensure she stays safe at the weddings she works.  Many have been backyard weddings that kept things small and intimate with family.

For outdoor weddings, Culp said she has seen extra hay bales placed to create space between seats. Another venue she photographed in, The Morris Performing Arts Center, had guests spaced between the theater’s seats, leaving at least three seats between groups.

She has had to adapt her photography style to be able to stay back further from the bridal party, groomsmen and reception.

“I take precautions,” Culp said. “I get tested [for COVID-19] once a week. I just want to be safe. Being a photographer, I am exposed to a lot of people.”

Culp said she and her second shooter also wear masks when they are on location photographing.

Usually, during engagement and wedding shoots, Culp will help pose her subjects. Without wanting to get too close this year, she has worked with her assistant to mimic the poses from a distance. She said it gets the couples laughing, which helps everyone relax, as well.

Throughout her first year exclusively doing photography, she had 24 weddings booked, many of which took place at the Grand LV, working side-by-side with Kennedy.

In additions to the changes Culp has seen in the industry, Kennedy said the gatherings are much smaller now. In an area where large weddings are popular, Kennedy said only two weddings have exceeded 40 to 50 people.

However, once the celebration has started, Kennedy said it is still the usual fare: dinner, dancing and cake.

Despite experts like Kennedy and Culp working to make nuptials as normal as possible, brides like Leonard were not keen to share their special day with the virus. Leonard said her wedding was much smaller than planned, and the people who attended were the closest circle to her.

Cutting their guest list down to fit within the mandates and to keep their families safe was difficult.

“My husband comes from a big family. He is one of 25 cousins,” Leonard said. “We only had one set of grandparents attend. They were concerned with COVID-19 and did not want to be out with even 50 people.”

Many of her guests at her small wedding wore masks. The social circle was kept very small — to guests she and her fiancé had been in contact with. The couple wanted to ensure their guests were safe. However, despite being willing to take COVID-19 precautions, Leonard did not want masks in her wedding photos.

“I had seen photos of weddings where everyone had masks on. It’s marking history,” Leonard said. “But that was one thing I did not want. I’ll remember it – I lived it. I don’t need photographic evidence.”

Instead, she wanted photographs showing their love for one another, and the beauty of the day. Culp helped the couple feel at ease and captured the day the way Leonard wanted to remember it.

“We had the chairs spaced out, and a lot of spacing between each row,” Leonard said of the wedding venue the day she said her vows. “Even at our wedding, we had masks and hand sanitizer placed out for people to use if they needed it, but we really tried to keep it to the 50 people we had been around. Nobody at our wedding was someone we had not seen at least in the past week or two.”

Though she had to make concessions for her wedding — fewer guests and face coverings — Leonard said her big day was still perfect and left her impressed with the way the vendors pulled it off.

“I think other than the fact that we had to reduce our wedding size, it went as we had envisioned it,” Leonard said. “I was thankful that we had no other added stress on my end.”

Bookings are continuing into 2021 and 2022 for The Grand LV, and as the wedding season wound down in the fall for Culp, she looked ahead to engagement bookings and weddings for the next year.

“I think you have to look at the bright side of the situation,” Culp said. “The wedding industry took a hit of negativity. We have to continue to deal with that. It taught us all to be humble and work harder.”

Postponed weddings and rescheduled receptions will carry forward into the future to celebrate those uniting in their love for one another.

One of those celebrations will be Leonard’s one-year anniversary reception, with as many friends and family as she hoped to have at their wedding.

“We bumped it up to early October,” Leonard said. “We can be out of the woods on flu season, and make sure everyone can be in attendance.”

There is another perk to having a bigger party the next year that Leonard is excited about.

“It gives me another reason to wear my wedding dress,” she said.

After more than 20 years in the Seattle area, Shannon Lyons, and wife, Cathy McBride, were ready for a change.... read more