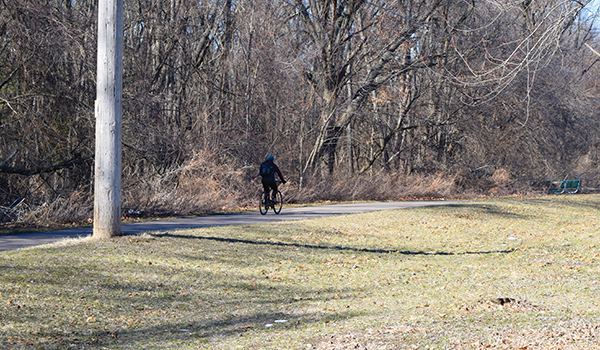 The Ontario Road Trailhead is center to early discussions between the Niles Township Parks Board and Trustees. The proposed plan would include a pavilion, water source and parking for pedestrians using the Indiana-Michigan River Valley Trail. (Leader photo/CHRISTINA CLARK)

NILES TOWNSHIP – A new trailhead is in the early discussion days for the Indiana-Michigan River Valley Trail over the next year.

Jill DeLucia, chair of the Niles Charter Township parks board, presented a plan to the board members on Monday evening including a pavilion shelter, 10 parking spots and a water source to the IN-MI Trail as it comes to cross Ontario Road in Niles.

“It’s a good place to have a trailhead. It affords more parking spaces than available at any other location of the trail,” DeLucia said. “That’s the goal, to make it an actual trailhead. Trailheads generally have several of those things. We have a seasonal restroom. Next, we would like to create a place to park and some shade.”
DeLucia said many people run the trail and ride their bicycles on it. She thinks having a pavilion shelter would be a positive as it would provide shelter for residents to rest under or take refuge from unfavorable weather.

When the section of the trail running between Niles Township and the city of Niles was completed in 2019, DeLucia said the trail counters at Darden Road showed the volume of people using the trail doubled. The increased volume proved to DeLucia there was an increased need for parking, as well.

“We used a lot of feedback we got from a survey when we made our five-year plan,” DeLucia said. “We looked at other trailheads, like the Pumpkin Vine Trail out in Goshen, Indiana. I’ve ridden [my bike] out east and looked at those trailheads.”

The cost for the features at the potential Ontario Road Trailhead would total just over $165,000.

Treasurer Jim Ringler voiced his concern for the pavilion’s location. The pavilion’s cost was estimated at $65,000.

“If I was putting an investment into one pavilion for the township, I’d tell you it would get used the most back here,” Ringler said, indicating the portion of the Indiana-Michigan Trail that runs by the township building on Bell Road. “If you had a pavilion to put up in the township, I would say it would have more value to be back here than versus down at the trailhead, not that it wouldn’t be nice.”

DeLucia said the parks board will be applying for a grant through the Michigan Department of Natural Resources. The grant, if awarded, would fund 75 percent of the amount needed, leaving 25 percent for the township to fund. DeLucia said the parks board would discuss what amount it would be able to put toward the trailhead of its annual budget, which was said to be about $15,000.

“We hope to be able to do some fundraising, because some local foundations contributed to the original building of the trail,” DeLucia said. “We think that they might be agreeable to make it more welcoming to people.”

At the board meeting, Ringler noted that grants tend to be awarded in late December. The township would be on the hook initially for the cost, if the grant were awarded, and reimbursed from the grant award.

There is a public hearing scheduled for 6 p.m. on Wednesday, March 3, hosted virtually, with access posted on the Niles Charter Township website. The meeting will allow the Parks Board to get public input on the next step for the trail.