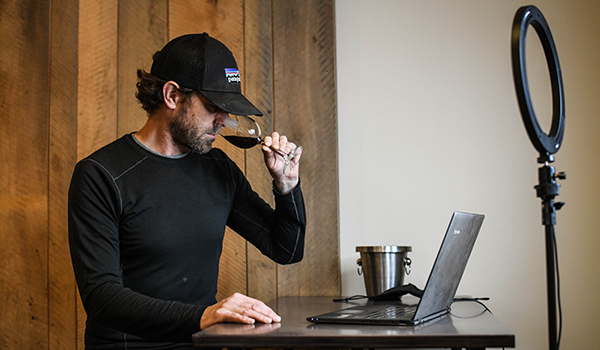 The tasting room at Hickory Creek Winery is small and intimate.

It is an area where visitors to the winery quickly become friends with the owner and staff members. The natural wood décor is warm and inviting. The bar invites customers to approach and learn about the offerings stored behind. As patrons push the door open, they are greeted as if they are old friends, whether they are yet or not.

This is an experience the owner of the winery, Adam McBride, has worked to deliver to his guests in their living rooms through virtual medium when visiting the winery is not possible. It is a tradition that could keep regular patrons, curious wine tasters and McBride connected. It was born, however, out of necessity as the COVID-19 pandemic shut down dining rooms and tasting rooms across the state of Michigan for months in 2020.

While McBride tested out new experiences that could be done at a distance, such as the wine tasting “flights” the establishment now offers, he used social media to promote different types of wine each week. He was able to begin shipping bottles or cases of wine to customers in the area, and in other states, so that by Friday evening, customers who wanted to have a winery experience could follow McBride along on the winery’s Facebook page during a Facebook Live video.

Back at the tasting room, McBride, owner since 2017, is at home in Hickory Creek Winery. His dog, Ranger, greets visitors and follows McBride around the tasting room. Once outside, Ranger comfortably spends time with customers, with McBride not far behind.

“We are a tiny craft winery, but we have a very loyal following,” McBride said. “Regulars and locals – so many people have picked up wine from me. We thank them for supporting me, and they have responded saying we don’t need to thank them. They have said they have a vested interest in keeping this place going because they love it so much.”

Navigating the winery through extensive shutdowns to in-person service due to COVID-19 has been a challenge for McBride. With Hickory Creek Winery’s intimate atmosphere, community means even more to visitors and the staff.

“We had to figure out how to stay connected with people,” McBride said. “The tasting room is the focal point of the winery. Ninety-nine percent of the business happens in there. People buy Hickory Creek wine because they had a good experience tasting it.”

Jim and Melissa Springsteen, Niles residents, were regulars to Hickory Creek Winery before the COVID-19 pandemic arrived in Michigan.

“To a degree, for us, the quaintness is what we enjoy,” Jim Springsteen said. “When it’s that size, you get to know the people there. It makes it a lot more personal. You feel like friends.” 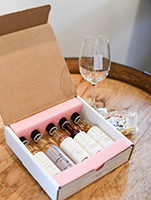 The scenic drive from Niles to the winery is another part of the experience for the Springsteens.

The couple first started going to the winery after spending a wedding anniversary there. Now, when Springsteen thinks of the winery, he thinks of that night — spending time with Melissa and becoming friends with much of the staff and McBride as the sun set.

“That stood out because it was not just the wine – it was the people there,” Springsteen said. “This is the place we want to keep to.”

White tents housing wooden picnic tables set against the border of the Buchanan countryside outside the winery were a new sight added to the winery in November. The shelter and seating create an open-air environment for customers, new and familiar, to gather more safely.

The tents are just one feature McBride and the winery staff have worked to adapt and continue fostering their community during 2020.

A theme in McBride’s wine career is coming back to community.

During the initial COVID-19 mandated shutdowns that began in mid-March, McBride had to get creative about how to continue running his winery, which relied heavily on the experience he and his team provided paired with the varieties of wines they made on site.

McBride had done a project during his studies at Lake Michigan College, earning his viticulture and enology degree, just after COVID-19’s arrival.

“We thought about doing in-home tastings during the off-seasons,” McBride said. “My class project before COVID-19 was how to get more interaction with the community during our off-season. The idea was doing an in-home wine tasting, where you go to their house, ship them the wine or bring the wine with you.”

“What happened with COVID-19, we thought, ‘let’s bring the wine to them and also talk about the wines virtually,’” McBride said. “It forced us to look into how we get the little tasting bottles of wine in front of people and let them have a social opportunity for that group.”

During the Facebook Live “Happy Hours,” as McBride came to call them, he would interact with the users who logged onto social media. He would read the comments in real-time and try to greet his regulars and get to know the newer viewers stopping in. Then, he would take his webcam setup and lead the group through a wine tasting of all sorts of red and white wines from the winery.

The “Happy Hours” grew in popularity at the beginning of the COVID-19 shutdowns.

“We did [the Happy Hours] every Friday,” Jim Springsteen said. “We did not miss one. It made it really interesting. We enjoy visiting the winery, not just for the wine but for Adam. We enjoy everybody there. When we were doing that, and he had to come up with that idea, we wanted to continue to support Adam and the winery as much as possible. It was also just a lot of fun. The way Adam did the Happy Hours made it fun and interesting.”

Springsteen said what made the experience even more special was that McBride would not just talk about the wine, but he would go more in-depth about the types of grapes that were used in the process.

“He would even break out his dry erase board,” Springsteen said. “He would do drawings of how the wine ferments. It was educational, and he made it fun.”

In the Facebook Live videos, McBride is seen in the winery itself with a big grin on his face. He jokes with his regulars and new friends that join the events.

“It is not a replacement for face to face interaction, but to be able to interact with people online,” McBride said. “I know Jim and Melissa well enough to be able to tease them a bit and have that dialogue through the chat. What I thought was really cool was the people that did not know one another that would communicate through the chat functions. When we were able to reopen, they would come across each other and recognize each other.”

To McBride, the challenging situation had a silver lining.

“It brought our world, which can be quite spread out, a little closer together,” he said.

‘Grape’ to be home 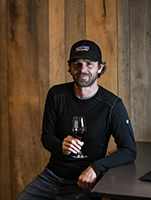 Originally from just north of wine country in Michigan, McBride hails from Allegan County. Before working at Hickory Creek, McBride served in the U.S. Air Force. His service took him abroad, and he was stationed in Germany for a couple years.

“In my last year of service, I was in the very western part of Germany famous for making Riesling,” McBride said. “I lived in a small wine making village and was fortunate enough to go to a lot of wine festivals, taste wines and meet some wine makers over there.”

He remembered one particular time when he was sitting next to a wine maker in the village at dinner. McBride listened to him talk about his passion for his wine and his vineyard.

“I decided that was my dream,” McBride said. “I want to do that someday. That’s where it all started.”

Between the passion for wine making and the connection McBride was able to make with the man and the community surrounding him, he knew he wanted to create a similar vision back home.

After he came back to the U.S., he left the U.S. Air Force in 2007. Ten years later, he took over Hickory Creek Winery.

“It’s fun. It’s a lot of work. It’s more work than I could have ever imagined,” McBride said. “But I love it. I love being my own boss. I’m passionate about what I do.”

As COVID-19 shut down mandates eased in Michigan in 2020 as the weather warmed, McBride once again changed his approach.

He developed tasting boxes, where he could showcase several wines, instead of shipping full bottles. This way, he could provide closer to what a private wine tasting experience at the winery would be like remotely for his customers.

With each purchase of a wine tasting kit, he would schedule a tasting and include a Zoom link and password.

“It took some getting used to, but it feels very natural now,” McBride said of the Zoom wine tastings. “A lot of the content is exactly the same as you would hear in the winery tasting room, but I think it is cool you get invited into somebody’s home.”

With Zoom, the feeling that McBride is also entering someone else’s space makes it a more intimate experience than a Facebook Live, which is a one-way video platform.

“You see the kids walking by, and the dog, and all of that stuff,” he said. “The thing I joke about is that I can’t see their wine glass.”

McBride said he can “geek out” about the wines, and talk for a long time about each one. In-person at the winery, he would generally notice when someone’s glass is empty, and he would take the cue to move onto the next wine. Without that cue, sometimes he has to establish a signal.

“I tell them ‘if I start talking too much, and you’re ready for more wine, hold your glass up to the camera so I can see it,’” McBride laughed. “It became a running joke.”

It did not take long for word to get around about the private tastings.

McBride has been host to private tastings through Zoom with just one or two people, and up to a group of 140 people for a fundraiser.

“Then I did a Zoom tasting with Zoom,” McBride said. “Someone from Zoom reached out to me and wanted to do a team building event with folks in Michigan and Chicago.”

Leading a private tasting with between 10 to 15 people who work for Zoom, on the Zoom platform, felt surreal to McBride.

“Here I am, tiny, little Hickory Creek Winery, doing a wine tasting with the big boys,” he said. “That was really cool.”