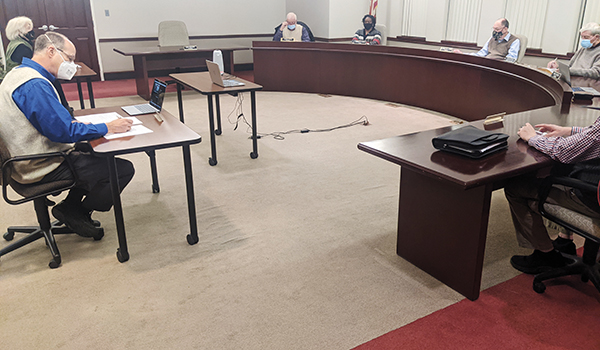 DOWAGIAC — Dowagiac City Manager Kevin Anderson had great news to share with the city council at the end of its meeting Monday at City Hall.

Anderson announced that the city of Dowagiac will receive $75,000 in Neighborhood Enhancement Program grants this year. The Neighborhood Enhancement Program, overseen by the Michigan State Housing Development Authority, is designed to launch improvement projects directly tied to enhancing and stabilizing communities. Projects can focus on neighborhood public amenity enhancements, improve residents’ quality of life, or help communities recover from the COVID-19 pandemic. In total, the MSHDA has awarded $1.9 million in NEP grants to 43 local governments and nonprofit groups across Michigan.

“We’re really excited about it,” Anderson said. “The neighborhoods have responded well, and the contractors responded well. Construction costs are up this year, so it probably won’t go quite as far as it has some years, but it’s still going to be a really good opportunity for property owners to be able to see some improvements not only in their house, but in their neighborhoods.”

With the grant funding, 15 Dowagiac homes will undergo renovations. According to Anderson, the two areas of focus will be homes around the water tower and the Walter Ward Park area.

“Those are the neighborhoods of focus at this particular time,” Anderson said. “We’re not ready for applications yet. We’ve got to go through a couple of things before we can start taking applications.”

Anderson expects the city will use a lottery system like it has in the past to choose which applications will be chosen for projects and that the early application period for projects will take place in July. The city has received more than $160,000 in grant funding over the past three years.

“This is really good news,” Anderson said. “Part of the reason that we have received so much is because we’ve successfully managed this program. Each of the years that we’ve been involved with it, there were some bonuses for that, and you can look to [Assistant City Manager Natalie Dean] for some of the leadership that she put into administering those programs. Most grant maxes fall into that $50,000 range, but part of why we got the ability to apply for more is that we had our program fully completed. All the projects were done, all the paperwork was completed by December 31, which was the end of their cycle.”

Mayor Don Lyons was pleased to hear the news and praised the city’s staff for the achievement.

“Were it not for the effort that the city administration has put in, this would not have happened,” he said.

“Thank you,” Anderson said. “We’ve got good staff working hard on this. I know this has been a goal of this city council for a long time to make investments into neighborhoods, so between this and the modular home program that’s really taken on some legs. I think we look at this last 24 months, and we’ve really taken a couple of really good steps forward, so now we just got to keep moving.”

“Every year, the state can make some adjustments to the poverty exemption guidelines,” Anderson said. “That needs to come before council for action, otherwise the ones from last year would remain in effect. So, these are standard routine things to come to you each and every year.”

The board also approved setting the procedure for board of review protests in writing. The move will allow for people to make protests and not have to be present for review.

“I think it’s good not only for this year but for years to come,” Anderson said. “This will make it more convenient for people who want to create protests and not have to meet face to face for a review.”

DOWAGIAC – Over the last year, the state of Michigan implemented Futures For Frontliners and the Michigan ReConnect program to... read more