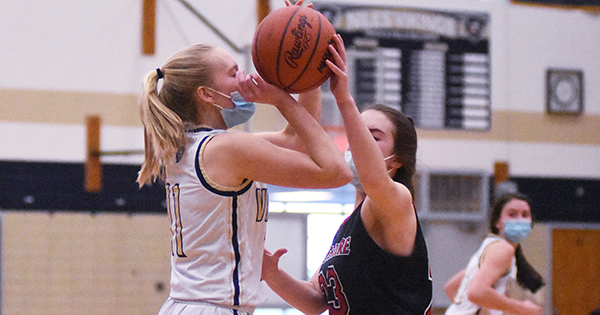 NILES — Finding ways to win when you are missing a key player often makes the difference between a good season and a great one.

The Niles girls basketball team is learning that lesson as, despite not having top returning scorer Amara Palmer for the past two games could not keep the Vikings from picking up victories.

The first game without Palmer, who suffered an ankle injury against Paw Paw, resulted in an easy 60-20 win over host Berrien Springs last Thursday.

On Saturday, Niles had to rally from an early deficit to defeat former SMAC rival Lakeshore 47-44.

Palmer has been placed in a boot and will see the doctor on March 3 to decide when she can return to the Niles lineup, according to Vikings’ Coach Jessica Johnson.

The Vikings remained undefeated in the BCS Athletic Conference Red Division with its win over the Shamrocks, who trailed Niles 23-0 after one quarter and were never able to recover.

Kamryn Patterson led all scorers with 16 points. She also had five rebounds, four steals and an assist for the Vikings, who also got 10 points from Alexis Rauch, to go along with five rebounds and two steals.

The two teams were deadlocked at 8-8 after one quarter, while the Vikings were able to rally late in the second quarter to take a 17-16 advantage into the locker room at halftime.

The two teams battled back and forth in the third quarter, with Niles holding a 31-28 advantage heading into the final eight minutes of action.

“It was hard coming down the stretch,” Johnson said of holding off Lakeshore. “And then to play half of that third-quarter without Kamryn being in foul trouble made it very difficult for us with the chemistry on the floor.”

Johnson was pleased that her experience players stepped it up as the Vikings improved to 4-0 overall and remain undefeated in division play.

“Skarbek had played two really huge games with confidence,” she said. “Alexis started playing better in the fourth quarter of the Paw Paw game and has continued to play well. To see them grow and play with confidence has been huge for us.

The Vikings are back in action tonight as they travel to Sturgis for a non-conference game scheduled to begin at 7 p.m.

DOWAGIAC — The Dowagiac and Niles boys basketball teams continue to struggle to find wins early in the 2020-21 season.... read more