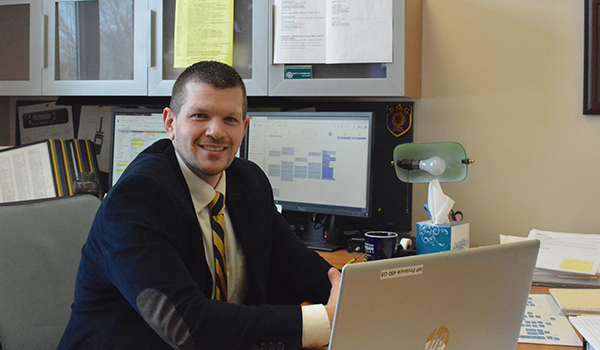 DOWAGIAC — Dowagiac Union Schools’ Feb. 15 Board of Education meeting was the first of many for newly-appointed trustee Brent Brewer.

After years of attending school board meetings as a parent, participating in meetings as a board member was a new experience for Brewer — but one he was ready for.

“It took a little bit of adjusting,” he said. “But it was good. It was a little nerve-wracking to be on that side. There’s a large sense of responsibility that comes with sitting on that side of the table, but that was a great way for me to be able to break the ice. I think being able to get into a meeting like that and being able to meet some of the students of the month and being able to talk with and see them was great because at the end of the day, that’s what we’re there for. We’re there for students to ensure they’re successful.”

In January, after interviewing several applicants, the DUS Board of Education unanimously selected Brewer to fill the vacant seat left behind by former board president Larry Schmidt. A graduate of Dowagiac Union High School and current chief of staff at Southwestern Michigan College, Brewer’s roots are firmly rooted in a community that has given much to him over the years.

“This is my home,” he said. “If I can find a way to give back to my community, I’m gonna do it, and I see that based on my strengths and skills that this just lends itself towards that opportunity towards trying to better our school district and so if that’s what I can do, I’m all in. Now it’s just time to roll up my sleeves and get to work. The board has been terrific as far as welcoming and educating me on what it takes to be a board member.”

Brewer has held numerous leadership titles at SMC since 2008, including director of enrollment management and the director of SMC’s Niles campus. He believes his years of experience in higher education will be an asset to both the board and the district.

“This job has provided me with a lot of opportunities to be able to talk with students,” he said. “What I have seen is that some of them just need a plan. Is it college? Is it going to the military? Is it going into trades or some kind of apprenticeship? I want to show them that college is an opportunity for anybody and everybody. Our motto is ‘knowledge for all,’ and we need to be able to live up to that. I think that that’s going to allow me to be able to show students that it doesn’t matter who you are or where you came from, you can still have a successful professional career.”

One issue Brewer hopes to address during his time on the board is the mental health of both students and staff in the district.

“It’s something that was there when I was a student in the district but it is more prevalent now,” Brewer said. “It’s not something unique to Dowagiac. But now it’s being seen it’s a lot more pertinent, and I think it’s because we’ve all become more knowledgeable about what mental health is. I think we see it a lot more, but I don’t think we’ve developed a strategy to address it, and that’s what we need to figure out. I think it’s an even bigger issue right now because of COVID because students are not being able to engage in some sports and students are being able to engage in certain things that they once did as an outlet.”

The challenges are many, but Brewer is proud to represent the school district for his friends, family and community.

“I think what makes this place special, even when I went to school and now with my kids, is that we truly are Dowagiac United,” Brewer said. “I know that sounds cliché, but we have a lot of passionate individuals, — whether that’s students, parents, teachers and community members — who legitimately care about the success of the Dowagiac both as a community and as a district. I think that’s unique in a way that to the point where we have we have the hashtag ‘Dowagiac United’ because we’re united as one. I think there’s some work that needs to be done, but at the end of the day, I think you saw it a few years ago when we passed that bond. We got the community to rally around in it, and it was passed with ease. I think that’s one of the biggest things, that we always come together when needed, and we rally as a group.”

SILVER CREEK TOWNSHIP — An Elkhart man was killed in a snowmobile accident near Dowagiac Saturday evening, according to the Cass... read more