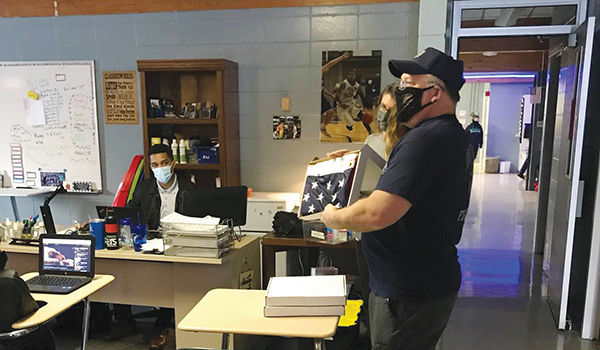 CASSOPOLIS — Starting Monday, students at Cassopolis Middle School will be able to start their mornings with the pledge of allegiance, thanks to a donation from a local veteran.

Cassopolis resident Chris Bergen and his company, Bergen R/C Helicopters, donated six American flags to Cassopolis Middle School on Wednesday. The flags will be used to allow students in each classroom to say the pledge of allegiance.

“We were thrilled,” said Cassopolis Middle School Principal Carey May of the donation. “Chris [Bergen] is a fabulous community asset and always willing to help.”

According to May, students expressed an “overwhelming” desire to say the pledge during random surveys distributed to students as part of the school’s Positive Behavioral Interventions and Supports program. A framework used by schools across the country, the PBIS program aims to establish a culture of support in schools to improve social, emotional, behavioral and academic outcomes for all students, according to the Center on PBIS.

“We are trying to give students a voice and give them a way to take ownership of the school because, at the end of the day, it is their school,” May said. “When they said they wanted to start saying the pledge, I knew that was something we could easily do.”

May and the middle school staff set out to ensure there were enough flags to stock every classroom. When they came up six short, May reached out to Bergen, a Cassopolis VFW member who had previously visited the school to teach students flag etiquette.

Bergen said he was honored to fulfill the request.

“I understood that this was a request, not from the school, but the from the students,” Bergen said. “As a veteran and business owner, I thought that was a very worthy request. My company decided to donate what they needed.”

A mentor with the high school robotics team, Bergen said he is already well aware that the Cassopolis school district raises caring and compassionate students. Even so, he said he was touched that the middle school students identified saying the pledge of allegiance as one of their top priorities.

“These kids continually surprise me and give me hope for the future,” he said. “For them to request this, it gave me a lot of hope.”

As a show of gratitude for the donation, the middle school invited Bergen to lead the students in the first pledge of allegiance on Monday.

“I’m extremely honored and very much looking forward to it,” Bergen said.

Following the donation, May said she is grateful for all the support the middle school has received from the Cassopolis community. She hopes that by continuing to give students a say in the school, similar community partnerships can occur in the future.

“It’s a cliché to say, but it really does take a village,” May said. “To know that we have the community behind us, that they have our back, it really makes you feel good. It makes you feel like you are doing something right.”