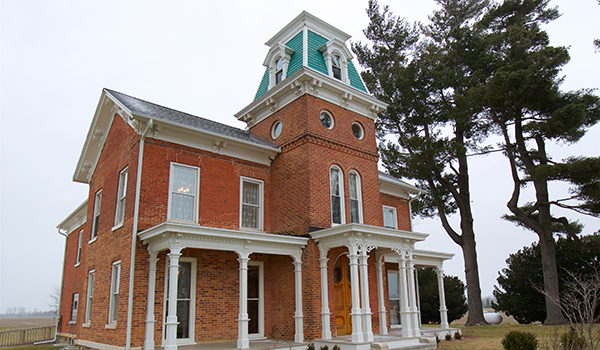 That is a situation Lee and Carl Sparks, along with their families, find themselves a part of Cass County history as the direct descendants of Isaac and Sarah Talbot Bonine, James E. Bonine’s parents.

There is pretty much nowhere you can go in Cass County and southwest Michigan where someone does not know at least a piece of their family history, let alone been to the Bonine House on M-60 in Vandalia.

The area was also significant because of its northern location, numerous abolitionists, and the fact that nearly 1,500 fugitive and free blacks were already present. The Bonines set aside are area called Ramptown for their settlement.

While most of the Underground Railroad sites have long vanished, the Bonine home and its carriage house remain and are being restored by the Underground Railroad Society of Cass County, which has not only preserved a unique portion of America’s history, but created an education center so that many more can come to southwest Michigan and learn about that history.

“It is kind of an honor to have ancestors who were part of the Underground Railroad,” said Lee Sparks. “In our history, [my relatives] lived in the southern part because they did not like slavery, so they moved north.”

Lee said as he began going through his family history, he wondered to himself, “why haven’t I gone through this before?”

He has found things that go beyond the Bonine House and its connection to the Undergroudn Railroad — things like Fred Bonine, who set the world record for being the fastest in the 110-yard dash, which he held until 1921. Fred, who was a sprinter and eye doctor, was born in Niles in 1863. Fred attended Niles Public Schools before going to the University of Michigan. He became an internationally known eye doctor who saw more than a million patients at his Niles office.

“At his office in Niles, he treated cataracts, and people would wait in line for hours,” Lee said. “Back then, not many people worked on eyes.”

Carl Sparks said that from time to time, and Lee agreed, people want to know about their family history when they become aware they are related to the Bonines.

“There is a lot of interest in the Bonine House. People have been asking,” he said. “When I drive by the house I think of my mother, [Lydia Rose Jones, who was married to Harold Sparks] who always loved that house. She loved brick houses and it ought to be to saved. I think of them a lot. It is like Lee said, ‘you hear the stories and now that we are older, we cannot remember them.’”

Lee and Carl, along with their wives, Mariko and Dawn, are grateful to all those who helped restore the James E. Bonine House, the carriage house and the many other projects that have helped save their family’s history and allow others to learn about it.

“It is beyond my dreams that anyone would take such effort,” Carl said. “It is a great story too, because the family moved up here to get away from slavery, and once they got up here, they were actually helping to free the slaves. It is a beautiful story.”

Lee and Carl are thankful that their ancestors believed so strongly in what they were doing.

DOWAGIAC — The Young Professionals of Greater Dowagiac is doing its part to support local businesses. The organization unveiled its... read more