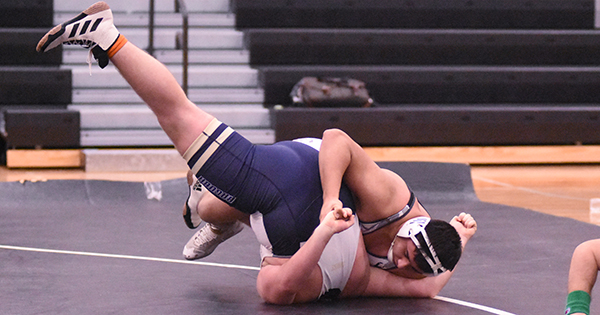 Brayan Parades goes for a pin of Niles’ Drew Racht on Tuesday. The Chieftains defeated the Vikings 43-32. (Leader photo/SCOTT NOVAK)

DOWAGIAC — Host Dowagiac went 1-1 at what was supposed to be a Wolverine Conference Quad on Tuesday.

Due to heavy snow overnight canceling school for all those scheduled to participate, Edwardsburg was unable to compete due to the school district’s no-school, no-play policy.

Niles, which will officially join the Wolverine Conference in the fall, is wrestling with the league instead of the BCS Athletic Conference this winter.

“It feels good to be back wrestling and competing,” said Dowagiac coach Colin Burandt. “It was a good quality win. We competed against a quality Paw Paw team. We know where we have to improve and we have a short time to do it. We will see if we can put it together.”

Dowagiac has the weekend off before heading to Three Rivers for a Wolverine Conference Quad. Niles is headed to Battle Creek Lakeview for a quad on Saturday.