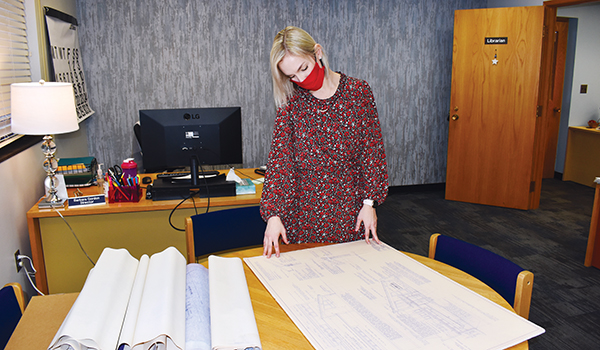 CASSOPOLIS — This week, Cass District Library Director Barbara Gordon’s office was filled with old blueprints and building plans. Soon, she hopes to update those plans with the help of an architectural firm and community input.

In December 2020, the Library Board awarded the bid for a facilities master plan to Intersect Studio of Kalamazoo, which will be partnering with Bialosky Cleveland. Gordon said the project would bring an experienced team of architects and designers to Cass County to study library facilities and help the staff plan for critical updates and capital projects. Now, the library is asking the community to be a part of the process.

Until the end of the month, the Cass District Library is offering a survey for community members to provide input about what amenities and services they would like to see at their local library branch. Those who partake in the survey will be entered to win a $50 Amazon gift card.

“[The architect firm] is going to come in and study things like furnishings, roofing, mechanicals and things like that,” Gordon said. “We also felt it was a really great time to survey the community. The library has not done a district-wide survey in a very long time. Since we are planning on investing in our facilities, and some of our facilities are starting to really show their age, myself and the library board thought it would be a good time to bring in some community feedback and see what improvements the community might like to see. We want to know how they are currently using the library, and based on that, how we can make their experience better.’

Gordon said, once the facilities master plan is completed, it will provide the Cass District Library with a 10- to 20-year plan to improve its Howard, Edwardsburg and Cassopolis branches.

“Each branch has a different demographic that they serve,” Gordon said. “We are interested in knowing what folks at the main branch want to see and how they might differ from what Howard or Edwardsburg want to see in their library, and how we can make accommodations for those things.”

Gordon said the district is looking at practical improvements, such as additional parking, and improvements that would attract modern library users, such as computer centers and community programming spaces.

“I would like to reimagine our current facilities so that we can better reflect modern library services,” Gordon said. “This main branch facility was built in the 1970s when public libraries just looked a lot different. What public libraries were focused on in 1977 is not necessarily what we are focused on now. I think it would be really great just to reimagine this building in a more modern light.”

Once the community surveys are submitted, Gordon said the facilities master plan team would review them. She expects the full master plan to be completed in May. Until then, she said she would encourage every resident who uses the library to make their voices heard by taking the survey.

“We really want [community member’s] feedback because it is their tax dollars that will be funding these projects,” Gordon said. “Right now, the sky is kind of the limit, and that is exciting. We have a unique opportunity to have each branch really reflect its community’s needs.”

To take part in the online survey, visit surveymonkey.com/r/casslibrarymasterplan. Paper surveys are also available at all branch locations.

Marcellus man gets probation for meth

CASSOPOLIS — A Marcellus man caught with methamphetamines in Dowagiac last summer was given another chance on probation Friday in... read more