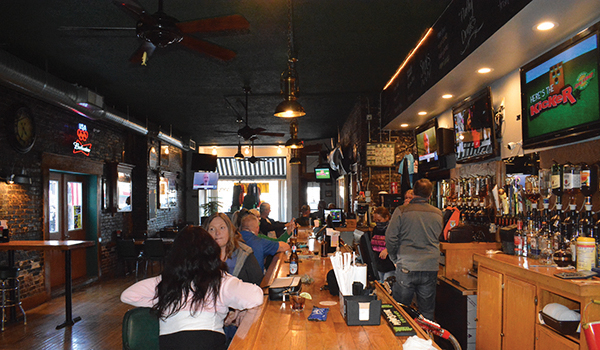 DOWAGIAC — Kyle Belew may have been a busy man on Monday, but he was grateful for it.

Feb. 1 marked the return of indoor dining to restaurants across the state of Michigan, and Belew, owner of the Wounded Minnow Saloon, 234 S. Front St., Dowagiac, spent the day serving up food and catching up with customers for the first time in months.

“It was a good launch,” Belew said. “The people are just glad to see you. The people that liked coming in weren’t able to come in and sit in a casual atmosphere like this. We’ve definitely felt the love. That’s what small towns are all about. People love this place. People love all of us. I would have been gone a long time ago if it was not for the people in this community.”

The Michigan Department of Health and Human Services released its latest epidemic order on Jan. 22 allowing indoor dining at restaurants to reopen Monday at 25 percent capacity with up to 100 people. Tables must be 6 feet apart, bars and restaurants must close by 10 p.m. and contact information must be collected from diners for contact tracing purposes.

Belew believes that if the capacity restrictions and curfew will likely lead to price increases in the future.

“To think that the virus knows the difference between a Walmart and The Wounded Minnow is ridiculous,” Belew said. “The idea that the virus is worse after 10 p.m. is ridiculous. If you keep your business at 25 percent, and you look at your cost structure, these places will bleed to death and even more will go out of business. I hope that people understand that what has happened will change the cost structure. I think there will definitely be price increases everywhere.”

The ongoing pandemic has forced thousands of restaurants throughout the state to close for good. Belew gave his employees a $3 raise during the shutdown to help shore up their decrease in tips.

According to Belew, the sudden closure of so many bars and restaurants has impacted the value of businesses’ liquor licenses, due to the dramatic increase in available liquor licenses across the state.

Down the street, Louis Poulos has owned and operated Mr. Wahoo’s Eatery, 56051 M-51 S., Dowagiac, for 26 years. He was happy to see familiar faces come into the restaurant on Monday.

“It’s very exciting,” Poulos said. “A lot of people came in to get breakfast like they used to and see other people. It’s nice to see people again.”

Like many restaurants, Mr. Wahoo’s struggled to make ends meet during the closure of in-person dining.

“Thank God I had some money saved,” Poulos said. “Otherwise, I would have been on the street. It was unexpected. A lot of businesses depend on traffic every day but at the same time, you have to have money saved up.”

Belew and Poulos are cautiously optimistic business will turn around going forward.

“We’re happy but we’re kind of apprehensive,” Belew said. “It feels like 25 years of hard work is spinning in the toilet and it wasn’t because of something I did. People are able to come in and interact with the people they’ve come to love in the places they’ve actually helped build. Hopefully, this is the start of the recovery.

SOUTHWEST MICHIGAN — The ongoing COVID-19 pandemic has impacted fundraising efforts across the country, and southwest Michigan is no exception.... read more