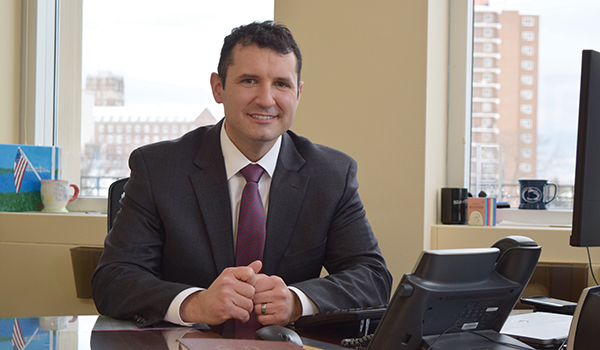 BERRIEN COUNTY – Steven Pierangeli gets texts and emails each day about violence and crimes happening throughout Berrien County.

“I get texts every morning about shootings that went on,” Pierangeli said. “[Wednesday] morning at 6:30 a.m., I got a text about several different shootings last night. The shootings and amount of gun violence is very real. We are doing our best to make as big of an impact as we can.”

The updates inform him that there is still work to be done each day to make Berrien County a safer place for people to work, play and raise families.

Pierangeli began his position as Berrien County’s prosecutor on Jan. 1, after former prosecutor Mike Sepic stepped down after 32 years in the position. Pierangeli was hired by Sepic 16 years ago to work as assistant prosecuting attorney. He said he is still getting used to being behind the desk he still calls “Mike’s desk.”

Since Pierangeli’s arrival to the Berrien County Prosecutor’s Office in 2004, he has worked in multiple positions, addressing different types of cases.

“I worked as assistant prosecuting attorney in the St. Joseph and Niles offices,” Pierangeli said.

Some of the most impactful points of his career were spent when worked with victims of criminal sexual assault, neglect and abuse.

Pierangeli remembered prosecuting a 2011 case in Niles, where five young men were arrested for a case involving videotaping, extortion and criminal sexual conduct.

“It was one of the first extortion cases in Michigan, and definitely in Berrien County,” he said. “I’ve always been drawn to protecting youth and making sure kids are safe.”

He has also worked on cases where parents and guardians had their parental rights terminated due to neglect, abuse or sexual assault.

When he is not working on the cases addressing the aftermath of crimes, Pierangli actively works to educate parents, students and community members about how to prevent situations from occurring in the first place.

“I’d rather prevent someone from being a victim, rather than try to put the pieces back together afterwards when they’ve been victimized,” Pierangeli said. “I’ve worked with lots of victims in these types of cases. What they go through is crushing. If I can prevent that, it is such a reward for doing this.”

He and his wife, Miranda, are parents to four children themselves, and Pierangeli said his children drive his work. Over the years, he has worked on programs specifically geared toward educating and keeping the younger generation safe.

“I’ve done things over the years to try to educate,” he said. “I created a program dealing with ‘sexting’ and the internet, cyber safety and cyberbullying. I’ve gone into schools to teach the program to sixth through twelfth grade. I’ve given talks at churches to parents. It’s really important that parents understand it and the technology.”

He has also worked on addressing gun violence and violence with teenagers and young adults, putting together presentations that include families of victims, or victims themselves, to speak to attendees about the impact of someone’s actions.

“We let them know the impact [violence] is having on the community,” Pierangeli said. “That’s a part of it too. We work with the schools, The Boys and Girls Club, just trying to stop the violence before it starts.”

Going forward, Pierangeli has already begun to put together more programs within the county.

He is working with the juvenile department on a diversion program for non-victim/non-assault juvenile crimes where it is possible to address issues outside of the formal court system.

Outside of youth programs, Pierangeli is looking forward to implementing changes in some of the ways the department works with narcotics trafficking. He said assistant prosecuting attorney Amy Byrd was assigned to the Southwest Enforcement Team to work on drug trafficking cases.

Pierangeli said Sepic had started the Children’s Advocacy Center of Southwest Michigan, which helps facilitate investigation into child sexual abuse and works to reduce trauma and offer support services. Pierangeli said the SART will aim to be similar for adult victims.

“Often times, [victims] don’t feel they have support, and they end up back in the relationship they were victimized in the first time,” Pierangeli said. “I think if we let them know where to find support and have support, they will have improved chances of working through it and moving forward. That’s the goal for the SART team.”

Every day is different for Pierangeli, including cases that come across his desk, boards and organizations he works with, and conversations he has with attorneys in the office. Working as a prosecutor is where he has wanted to be since he decided to study law. He believes he is in the right place to make an impact. With the work he is doing to work with both juvenile offenders and adult victims, he hopes to keep Berrien County a safe place.

“I’ll never be able to stop it all, but I try to prevent some of it,” Pierangeli said.