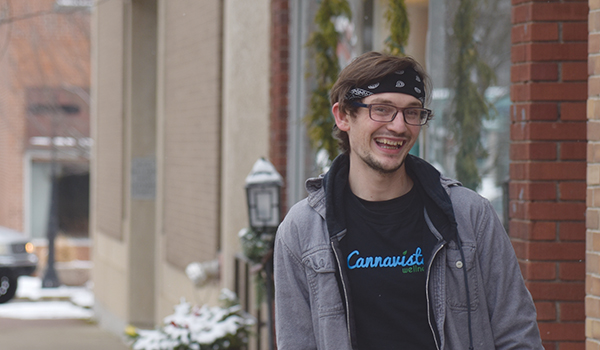 BUCHANAN — One year ago, Freddie Miller, 29, was unemployed, living with his mom in New Paris, Indiana and without a driver’s license.

Today, he has moved out, gotten his license back and can be spotted five days a week behind the counter at his job in his new home of Buchanan. No matter where he goes, his new neighbors can expect to hear his trademark laugh trailing behind him.

“It’s been pretty magical,” Miller said of the past year of his life. “I’m very, very blessed.”

Miller has two things to thank for his new-found good fortune — marijuana and Jimmy Kimmel.

In January 2020, a local news clip of Miller waiting in line at the grand opening of the Releaf Center, a Niles marijuana dispensary at 1840 Terminal Road, went viral. Miller’s stereotypical “stoner” demeanor, infectious laugh and friendly personality stole the hearts of people across the country, and it did not take long before celebrity talk-show host Jimmy Kimmel found the clip. On Jan. 30, 2020, Kimmel interviewed Miller on “Jimmy Kimmel Live!”

“I was super nervous,” Miller said. “I was laughing from the beginning to the end, and it was all nervous laughter. A lot of people said, ‘he must have been so stoned. Did the weed that to him?’ Weed won’t really do that to you, but nerves definitely will. … But, for the first interview, I’ll be honest, I did drink a beer and did a couple dabs with my friend, Tony, beforehand.”

The response to the appearance was swift. Commenters on the Jimmy Kimmel Live YouTube channel took to Miller, leaving comments like “This dude just makes me happy,” “Fredrick Miller is a true American hero” and “He’s so chill.”

“I’m actually speechless when I think on it,” Miller said, reflecting on the interview. “I always say that Jimmy reached into the housefire that was my life and turned it upside down.”

Soon, sponsorship deals came rolling in, along with job offers and requests for his appearance at festivals such as Ann Arbor’s Hash Bash. He was featured on the cover of cannabis lifestyle magazine Sensi and — in what he calls one of his greatest accomplishments — in his hometown newspaper.

“For a while in Niles, I was like a town hero. Everybody wanted to take pictures or knew who I was,” Miller recalled. “I keep saying it, but it really did change my life. I’m a guy from Indiana with experience in the RV industry. I was a janitor, and I was unemployed before I went on the Jimmy Kimmel show. I never thought I would be standing here, talking to [reporters] at my job at a dispensary. It’s crazy.”

In addition to the notoriety, the Jimmy Kimmel appearance also netted Miller his dream job. Rick Paniagua, owner of Cannavista Wellness at 120 E. Front St., Buchanan, initially invited Miller to his dispensary to be the shop’s first recreational marijuana customer. That sale turned into a job offer, and now Miller works full-time as a Cannavista “budtender,” or as Panigaua calls him a “weed ambassador.” Now that much of the initial excitement surrounding his Jimmy Kimmel appearances has died down, Miller said he puts the entirety of his efforts into his job.

Though Miller has used cannabis recreationally since he was 23 years old, he said his new job had given him a new appreciation for the legalized product and how it can help some of Cannavista’s customers with pain management and other symptoms.

“This is the best job, and I’ve learned so much,” he said. “My favorite part about the job is helping people find pain relief and the right products for them.”

Though it was his stoner personality and signature laugh that brought him his taste of fame, Miller said he wants the world to know that he does not always “talk like a surfer guy” and can be serious. Even so, he said what he has most enjoyed about his experience was being able to put a smile on people’s faces.

“If I could have one job in the world, it would be to make people laugh, and I feel like I’ve been given that job by Jimmy Kimmel,” Miller said. “It’s just been really cool, man.”

DOWAGIAC — C. Wimberley Automotive’s 11th annual Feed the Hungry campaign has much to be thankful for. The campaign announced... read more