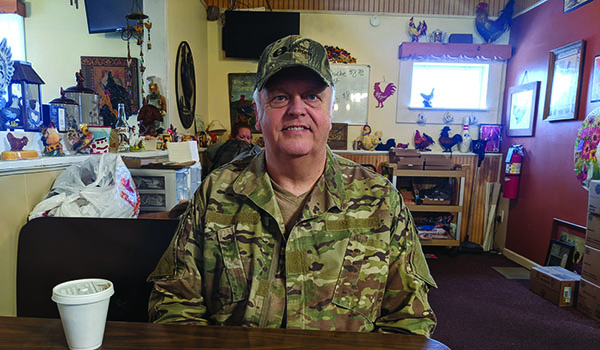 Tim Rhodes, of Niles, has been a Rise-n-Shine Cafe patron for more than 20 years. Rhodes plans to continue to support the restaurant as it continues to defy the Michigan Department of Health and Human Services' COVID-19 restrictions. (Leader photo/MAXWELL HARDEN)

NILES — Gov. Gretchen Whitmer and the Michigan Department of Health and Human Services may have extended the COVID-19 restrictions in Michigan through the end of January, but that has not stopped Rise-n-Shine Cafe from serving eggs and toast every day.

At 6 a.m. Saturday, regulars entered Rise-n-Shine Cafe, 2616 Detroit Road, to drink their morning cups of coffee and to chow down on their usual meal of choice. The restaurant remained busy throughout the day as patrons dined in to support local business.

Saturday’s business was tied to an event to support dine-in meal service throughout the state. The Saturday event was posted on social media by State Rep. Brad Paquette.

“Think about how many people work here,” said Dean Nelson of Buchanan. “How many houses and cars are they paying for? This restaurant puts people to work. I have several friends who own restaurants and they’re saying that they won’t make it. I don’t want to [get the virus] but there are ways of doing it safely. I’ve been coming here to support them because I want this business to succeed.”

Owner Angel Robison was thrilled with the support she has received from the community and beyond since making the decision to open up the dine-in space at 50 percent capacity on Dec. 11.

“We couldn’t afford to not open,” she said. “We all had bills to pay. We have 10 families that work for us. The amount of people who want to support us has been amazing. We have people that have come from all over to come and support us. Some regulars are there even twice a day.”

The restaurant was served a cease and desist letter from the health department, but Robison said she will not close the dine-in area and is not optimistic that the government will allow dine-in services to begin on Feb. 1.

According to her, business in recent weeks has been better than it was before the pandemic.

“People want to go out to eat,” she said. “They want to sit down and have a meal. For us to just offer carryout would not be enough when people are driving over the state line to dine in.”

Tim Rhodes has been a Rise-n-Shine regular for more than 20 years. While he understands the seriousness of the COVID-19 virus, he believes that restaurants should be allowed to open with protocols in place.

“I don’t see why these places can’t be open at fifty percent capacity,” he said. “To me, it’s about common sense. If you’re sick, stay home. I’m here to support them. Hopefully, the governor lifts restrictions on Feb. 1, but until then, what are these people supposed to do?”

Another regular, Russ Garvin, of Niles, makes it a point to visit Rise-n-Shine every day it is open. A 24-year army veteran, the cafe feels like home to Garvin.

“Everybody here is local,” Garvin said. “Everybody knows everybody. You walk in here, you’ll see 20 people you know.”

The social interaction experienced at restaurants is something workers and patrons missed.

“We need that,” Robison said. “We have a lot of widowers that come in because they need to be social.”

“It’s just a homey place,” Garvin said. “I enjoy being here and enjoy the company.”

As another extension decision looms in the coming weeks, the restaurant’s patrons plan to support the restaurant no matter what happens.

“I hope they continue to do well,” Garvin said. “I don’t want to see them fail. I come down here to get stuff that I don’t even need to help support them. You have to take care of your community. If we don’t do anything, they’ll close up. We want to support our hometown. That’s all we want to do.”

MILTON TWP — A teenager has died after succumbing to injuries sustained from a truck versus pedestrian crash in Milton... read more