DOWAGIAC — A Dowagiac resident will soon be joining the centenarian club. 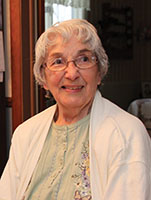 Forest Glen life enrichment director Kayla Lyons said Fox is a pleasure to be around.

According to her eldest daughter, Rita Pusey, Fox was born in a small family farmhouse in Bristol, Indiana during a blizzard on Jan. 18, 1921. Her parents struggled to support their growing family and lost the farm during the Great Depression. Their hardships were to the point that Fox and one sister were enrolled at a sanitarium school in Fort Wayne for a year in the early 1930s due to malnutrition.

Fox graduated from Bristol High School, and is now the only surviving member of her graduating class. It was through the influence and support of friends from that church that Fox was able to enter college courses, first at La Sierra College (now University) in Riverside, California, and then at Emmanuel Missionary College (now Andrews University) at Berrien Springs.

After completing requirements for a teaching certificate, Fox taught at elementary schools at Marion, Indiana and Vandalia.

She continued teaching while living on the small farm her parents had bought in Cass County. It was there that she met her husband, Paul Fox, a GI recently returned from his service in the Pacific Ocean theater of World War II. They were married in spring 1949 and made their home in the Marcellus area.

In addition to Pusey, Fox had two more children in Nancy and Kenneth, each born in the 1950s. She raised vegetables in her garden and did massive amounts of canning and freezing food for her family and encouraged her children in academic and music education, often sacrificing her personal needs to make sure there was money set aside for lessons, Pusey said.

“She loved to cook and bake for the family,” Pusey said. “She liked sewing clothes for the kids to wear. She tried to make things fun for us.”

According to Pusey, Fox loved to write poetry for special occasions for family and friends, and enjoyed performing in comical skits for church social programs. She also sang together with her sisters for church services.

As Pusey and her siblings grew older, Fox returned to her career in elementary education as a teaching aide for Marcellus Public Schools. She retired to devote herself to caring for her mother at home until her death at almost 101. Years later, she nursed her husband at home as he fell victim to pancreatic cancer. She did this even as she herself was 88 years old.

“She lived with a lot of hardship in her life,” Pusey said. “But even so, she’s still a positive person.”

Fox began life in an era when her father still used horses on the family farm. She went from the transportation era of Model Ts to the age of space travel. She has outlived all her siblings and cousins of her generation. She survived several major health crises, and while her body has grown frail, her memory, wit and caring personality survive to bless her family and friends, Pusey said.

“She keeps up with interest in current world events,” Pusey said. “She enjoys participating in visits and activities with her neighbors in her assisted living facility. She looks forward every day to calls, letters, in-person and screen-time visits, and news from her six grandchildren, 10 great-grandchildren, and many nieces, nephews and friends. She made a difference to the people her life touched. She still does. We’re just thankful. She still has her bright smile and her cheerful personality.”