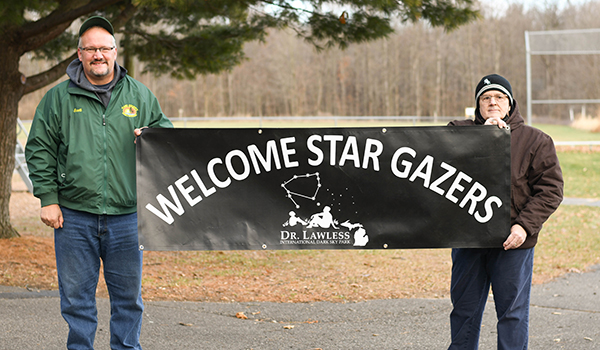 CASSOPOLIS — Cass County stargazers will have many opportunities this year to view planets, constellations and more at a park dedicated to preserving naturally occurring dark skies, thanks to the Cass County Parks Department.

“After the success we had last year, we knew we wanted to bring back viewing nights at the park this year,” said Robert Parrish, Cass County Parks Board member and Dark-Sky advocate.

The nighttime viewing schedule is a component of the ongoing educational programming Dr. T.K. Lawless Park is putting on as a part of its designation as an International Dark Sky Park and Michigan Dark Sky Preserve. The Cass County park achieved the designation last year from the International Dark-Sky Association, the leading organization combating light pollution and the excessive use of artificial light worldwide. To keep the title, Dr. T.K. Lawless Park must continue to have Dark-Sky friendly lighting, advocate for the night sky’s protection, have appropriate light readings and more.

The Cass County Parks Department first started hosting regular extended stargazing hours at the park in summer 2020. During the weekends it was open in those months, Cass County Parks Director Scott Wyman estimated more than 1,200 visitors attended from as far as Missouri, Iowa and even England.

“It has been wonderful to see so many people embrace [the Dark Sky Park],” Parrish said.

In 2021, Parrish is opening to double the number of visitors to the park during Dark Sky nights. To help encourage more attendance, Parrish is hoping to add events on select weekends to augment the stargazing, such as musical acts, yoga sessions and astrophotography courses.

A lover of the night sky himself, Parrish said he would encourage everyone to attend at least one of the Dark Sky nights at the park this year to view the stars.

“No matter how you look at it, we are all made of ‘star stuff,’ and looking up at the night sky is a way to connect with our origins,” Parrish said. “I think that is important, especially now during the pandemic and the political strife our country is going through. It’s nice to come and view the stars and forget about your worries and destress a little bit.”

Parrish said if a weekend on the schedule is canceled due to weather, the parks department will work to host Dark Sky viewing the following weekend.

CASSOPOLIS — Cass County 4-H youth still have time to apply for a scholarship that could give them a leg... read more