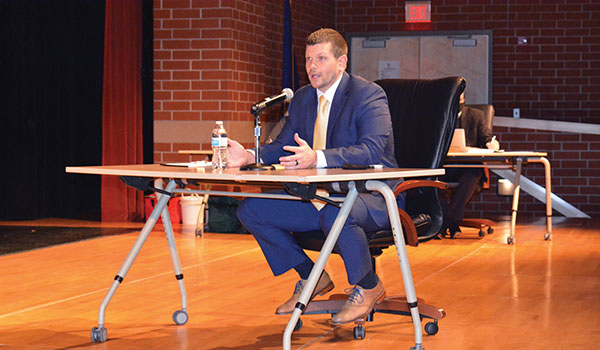 DOWAGIAC — There is a new board member in town, and he is a familiar face in the Dowagiac Union Schools community.

Wednesday, after hours of interviews and deliberation, the DUS Board of Education unanimously chose Brent Brewer to fill the vacant seat left behind by former board president Larry Schmidt.

“I thought we had four great candidates,” said newly-elected board president Ronda Sullivan. “To come out during a time where it is not popular for them to be on the board, for them to come out and be so committed to the process was impressive. All of them did their homework and are dedicated to the community in some capacity.”

Brewer, chief of staff at Southwestern Michigan College, was selected over fellow candidates Craig Schmidt, Jessica Shank and Angela Johnson. He also ran for a spot on the board in the Nov. 4 election and placed fifth behind Ruth Ausra, Carrie Franz-Freeman, Ronda Sullivan and Tracey Hatcher.

Due to the ongoing COVID-19 pandemic, the council hosted the interviews in the middle school auditorium, while streaming them live on YouTube for the public to view.

“I want to develop a plan for those students,” Brewer said. “Whether they go into apprenticeships, the military or college we can ensure they are heading in the right direction.”

Attracting families to the district was also an important factor in Brewer applying for the seat.

“The development of a strategy to be able to recruit and obtain families to this district is important,” he said. “We have got to find a way to bring young families to this district. We lose families every year to school of choice. We gain some as well, but we need to make sure that we’re on the positive side of that, but we are getting more students. I want to be that school in Cass County. I want people to say that Dowagiac is the school to go to.”

When asked what he thought was the most important skill students need upon graduation, Brewer said the ability to communicate is important.

“Communication does not mean communicating via text, TikTok or Instagram,” he said. “The ability to communicate means looking at someone face to face or on the telephone. They’re going to need that skill set when they’re setting up an appointment or applying for a job.”

One of the aspects of Brewer that resonated with Sullivan was his emphasis on important life skills such as communication and financial literacy.

“I am passionate about life skills and preparing,” Sullivan said. “All of our kids are going to make different decisions. He had the same passion for supporting them, whether it’s college or going into the workforce. He understands that we’re all from different walks of life and that our choices will be different. We want to support our students and let them know they can be successful no matter what their decision is.”