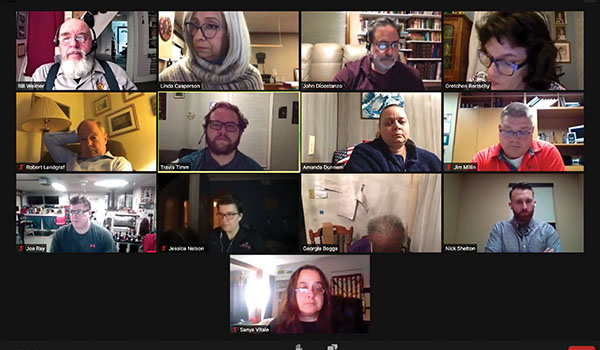 On Jan. 6, a pro-Trump protest in Washington D.C. turned into an insurrection at the Capitol building as electoral college votes were being certified. Monday, Niles City Council members addressed the violence that has had an impact on communities far outside of the nation’s capital.

Council member Jessica Nelson went first and set the tone for the comments from council.

“I think it would be derelict in my duties not to acknowledge what happened in our country last week,” Nelson said. “Our country experienced an unprecedented domestic terrorism attack to the Capitol Building last week in Washington D.C. Even though it might feel that it happened miles away, we are all coping with the trauma of these events. It’s very real. It’s very scary.”

“The action of those rioters was in no way patriotic,” Nelson said.

Nelson noted the events have taken place during the ongoing COVID-19 pandemic, and said on top of dealing with that there is a mental health crisis coupled with it.

“All I can say is we need to have civil and open conversations, and we need to make sure we don’t ever get to the point in our community where we feel violence is the answer,” she said. “I think we have a really wonderful, strong community.”

Nelson said she hoped community members knew they can speak with their city council members and representatives if they have concerns.

“It’s nice to be a part of a nonpartisan governing body at a time like this,” he said.
Council members Georgia Boggs and Travis Timm echoed Nelson’s statements. Boggs said she enjoyed how willing to work together the community of Niles has been.

Council member Charlie McAfee, who is recovering from COVID-19, agreed with what had been said.

Council member Gretchen Bertschy said she had been concerned about the protests and riots over the past summer.

“I had felt very bothered by the high rates of riots that had been occurring all throughout, and particularly, our coastal communities,” Bertschy said. “I was always appreciative that I did not see that level of violence here in Niles.”

Council member John DiCostanzo said it was “unfortunate” the council was bringing national politics into the discussion, but did let his opinions be known as well.

“There is never any justification for the violence we saw last Wednesday, but there are reasons things like that happen,” DiCostanzo said. “Just like there are reasons we had violent riots all summer that went uncondemned by our national news media and one of our political parties.”

He said he hoped the U.S. could find a way to unite.

“I can have conservative views. I can believe illegal immigration is wrong – that doesn’t make me a criminal, and it doesn’t make President Trump a criminal,” DiCostanzo said. “We have people in this country who think things like that are illegal. So, don’t be surprised by violence if we can’t get honest news media.”

At the end of the comments, Shelton again said it was a great time to be a part of a non-partisan governing body.

“At a local level, our job is to listen to the concerns of our community,” Shelton said. “Sometimes those concerns do extend to another level. I appreciate the comments of the council. It is fair to bring those comments and thoughts to light.”

NILES — A two-vehicle crash occurred at Fifth and Sycamore streets in Niles around midday Tuesday. A passenger vehicle and... read more