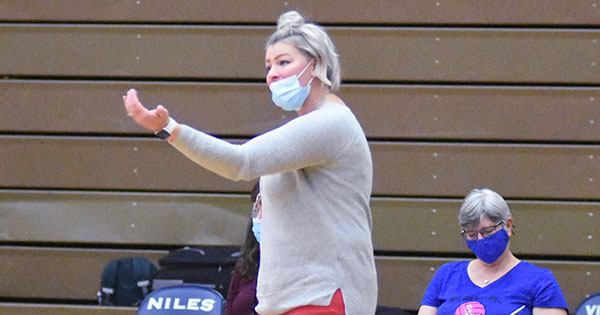 EDWARDSBURG — As if the challenge of facing the two-time defending Division 2 state volleyball champion Grand Rapids Christian was not big enough, Edwardsburg will have to do that after not having played since November.

The Eddies (25-7) will take on No. 1-ranked Grand Rapids Christian (29-4) in the Division 2 state quarterfinals Tuesday at Three Rivers High School. The match is scheduled to begin at 6 p.m., and the winner advances to the Kellogg Arena in Battle Creek on Thursday for the semifinals.

Second-year head coach Nikki Bush knows that one week’s worth of practice will not make up for the time lost since Nov. 12 when Edwardsburg won its first regional championship since 1992 when it swept Battle Creek Harper Creek.

“Practice has been OK,” Bush said. “Obviously, one week won’t bring us back to where we were, but the girls have really worked hard. Unfortunately, we’ve had some setbacks, but we are ready to go.”

One of those setbacks was the loss of second-team all-state libero Brooklyn Broadway, who will miss the remainder of the season due to a non-COVID related issue. She will be replaced by Jersey Bays, who also filled in at that position when Broadway missed the opening six weeks of the season with a wrist injury sustained in a car accident.

Bays and all the defensive players will have to be at the top of their game against Grand Rapids Christians’ big bangers — Addie vandeWeider (six-foot outside hitter) and middle hitter 6-foot-3 middle hitter Evie Doezema.

“We are going to have to shut down their outsides,” Bush said. “Defense has been looking good this week.”

The Eddies will counter with their “big three” upfront — Paige Miller, Sophie Overmyer, both seniors, and junior Macey Laubach. All three have eclipsed the 200 kill mark, with Miller and Overmyer earning honorable mention all-state.

Another key for the Eddies will be veteran setter Emma Strefling, who earned was an honorable mention all-state selection.

Both teams have had to take part in the Michigan Department of Health and Human Services’ pilot rapid testing program in order to continue the season. Bush said that went well.

“Testing has been our saving grace to keep our lineup full and not losing playing time to quarantine,” she said.

A limited number of fans will be allowed into the match. Those tickets are going to immediate family only. The game can be seen live on MHSAA.tv.

SOUTHWEST MICHIGAN — Michigan reported an increase in COVID-19 cases and deaths over the weekend, according to the Michigan Department... read more

Police searching for vehicle of interest in Cassopolis shooting