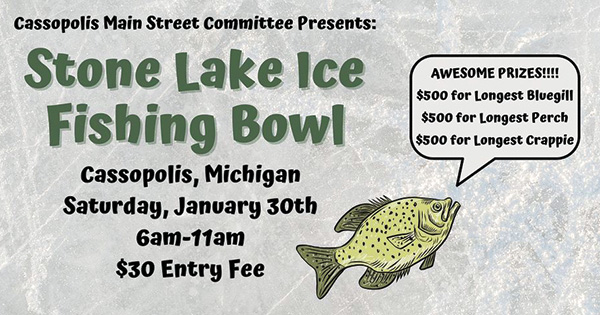 CASSOPOLIS — If at first you do not succeed, try, try again.

That is going to be the unofficial motto of the Cassopolis Main Street Committee as it will once again attempt to host the Stone Lake Fishing Bowl on Jan. 30.

The Cassopolis Main Street Committee resurrected the tournament in 2018. Originally, the ice fishing tournament was supposed to return in 2017, but a lack of ice forced organizers to cancel the event. The tournament was canceled last year as well.

If the event cannot be held on Jan. 30, it will be postponed until Feb. 13. If there is no ice on that date, the event will be canceled until 2022.

“We considered it successful because it was the first one we ever got to work,” said Cassopolis Main Street member Ben Anderson of the 2018 tournament. “But there was a lot of interest from the public in general. There was some disagreement among some people about there not being enough ice, or there being too much snow on top of the ice because it snowed so heavily the night before, so I think that held back some of them.”

“Obviously, we want more,” he said. “But that was a good turnout for what we had.”

During this year’s tournament, competitors will be trying to win $500 in one of three categories — longest bluegill, longest perch and longest crappie.

The tournament will run from 6 to 11 a.m. Jan. 30. Check-in will be behind the Pioneer Log Cabin. Fishermen will return to the Log Cabin with their catch for the final weigh-in and the awarding of the prize money.

Trying to host an ice fishing tournament is a real challenge, according to Anderson.

“It is one of the hardest events to try to put together,” he said. “We are really trying to build it around the coldest part of the winter historically. We are trying to give ourselves a way in and a way out. I really commend anyone who gets one of these things set up and has success with it.”

Regardless of how the 2021 tournament works out, Anderson already has an eye on next year when the village can show off its new pier and beach area, which are currently under construction as part of the Streetscape Project.

“That pier, along with the other additions to the village, is going to make a huge impact on how the Main Street Committee does our events,” he said. “We are going to try to utilize it every chance we get.”

The committee did consider canceling this year’s event due to COVID-19 and state restrictions, but with it being outdoors and the amount of area that is available on Stone Lake, Anderson feels that it could be a huge draw as people are searching for ways to get outside.

“There is a certain amount of distance you have to keep between fisherman anyway,” he said.

Participants must wear masks while checking in and during the weigh-in at the end of the tournament, as well as keeping social distancing in mind throughout the day.

Brandywine, Buchanan schools back to the classroom

BERRIEN COUNTY – Some students in Berrien County are relieved to have returned to in-person learning this week after more... read more