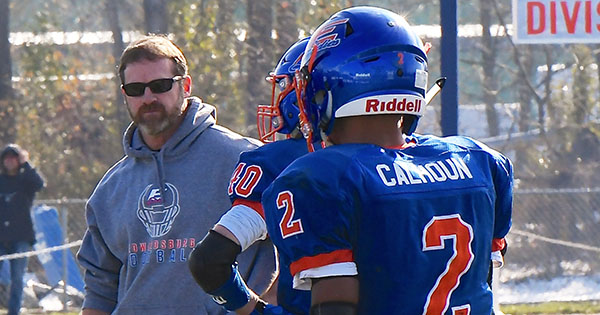 Edwardsburg coach Kevin Bartz said that getting his team ready mentally and emotionally for Saturday’s regional has been as big a challenge as it has been to get them ready physically. (Leader file photo)

EDWARDSBURG — There has been more than Xs and Os to deal with as the Edwardsburg football team prepares for its Division 4 Regional championship game against Grand Rapids South Christian on Saturday.

According to veteran head coach Kevin Bartz, getting prepared for such a game after not playing a game for more than a month is challenging.

“The biggest challenge to restarting the season, for the fourth time, is trying to maintain the player’s mental and emotional state,” he said. “These athletes have been shut down three times, not knowing if their seasons would finish or not. It is hard to maintain focus and enthusiasm as the season nears six months. The weather has become cold, and several of these athletes are ready to start their winter seasons of basketball and wrestling.

“We are trying to look at this as a three-game season with the potential to be a state championship. Knowing that that goal is attainable and within reach in the next couple of weeks is what is keeping these kids grinding it out.”

The other challenge is Grand Rapids South Christian, which comes into Saturday night’s game having defeated Hamilton 56-14 in the district championship game. The Sailors’ lone loss came back on Oct. 23 when Grand Rapids Catholic Central edged South Christian 28-27.

South Christian is playing with a backup quarterback, sophomore Jake DeHaan, who replaced senior starter Ty Rynbrandt during the first round of the playoffs against Kelloggsville. Rynbrandt, who threw for more than 1,000 yards and 15 touchdowns, suffered a season-ending broken collarbone.

DeHaan tossed a pair of touchdowns against Grand Rapids Christian in his first varsity start. Against Hamilton in the district championship, he threw for 322 yards and seven touchdowns.

Even with the big numbers from DeHaan, Bartz said the Sailors have a balanced offense.

“Two athletic running backs that can eat up yards on the ground and a prolific quarterback that has several excellent receivers to provide air support,” he said. “We are going to have to show several different defensive schemes to keep them off balance and try to limit the number of big plays (20-plus yards). Defensively, South Christian has two phenomenal defensive ends and a core of very active linebackers. We are going to have to attack their ends using various blocking schemes and be able to effectively block them at the second level.”

The Eddies will try and counter with its powerful running game, capable of chewing up large chunks of time off the clock or scoring from anywhere on the field.

Both teams have had to clear the state’s pilot rapid testing program for COVId-19. The teams had to be tested three times this week. But according to Bartz, the process was easy.

“The testing protocol is relatively simple,” he said. “It is easy to administer, and the results are immediate. We have had four athletes who have tested positive. All were asymptomatic and would not have known they had COVID if they hadn’t taken the test.”

The final challenge for the Eddies has been practicing due to the weather. After having basically no snow in December, a New Year’s Day snowstorm has forced the team to be flexible.

“The weather has created some mild inconveniences,” Bartz said. “If it is raining, or the field is snow-covered and soggy, we have stayed in the gym to get our work done. Most days however, have been between 30 and 34 degrees, with very little wind, which we have found to be pretty good practice weather. We expect to be outside every day this week for all of our practices. If we are going to play in these conditions we need to practice and train so our bodies are acclimated come game time.”

Originally, Michigan High School Athletic Association said no fans would be allowed for the fall sports season’s final three weeks. The MHSAA had a change of heart on Monday, and is allowing 125 tickets per team for each game. Those tickets may only be used by immediate family members.

Saturday night’s game will be the second meeting between the two schools. The Sailors defeated the Eddies 50-48 in the Division 4 state semifinals.