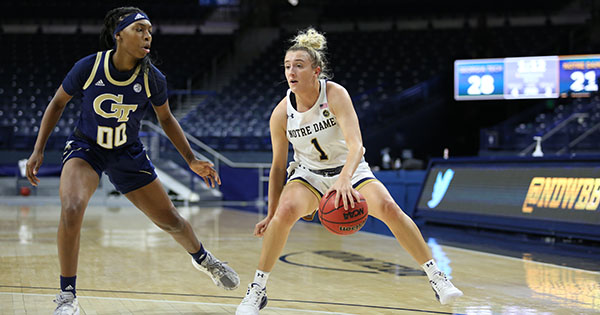 Dara Mabrey (1) and the Notre Dame women’s basketball team had their games against Syracuse and Pitts postponed due to COVID issues. (Photo courtesy Notre Dame/ACC)

Each program is adhering to the outlined protocols within the ACC Medical Advisory Group report, which is available on theACC.com.

As a result of postponements impacting games this week, Louisville will travel to Virginia Tech on Thursday, Jan. 7 for an 8 p.m. tipoff on RSN. Boston College will travel to Wake Forest on Sunday, Jan. 10 with the game time and network to be determined. Both games are moving up from their original dates later this season.

The full 2020-21 ACC women’s basketball schedule can be found on theACC.com and a full list of adjusted games is below.