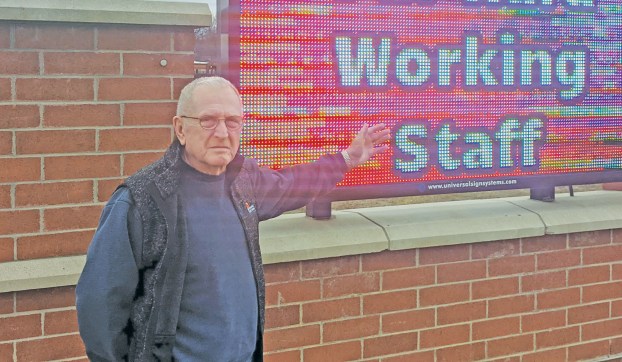 DOWAGIAC — Larry Schmidt is a patient man. One would have to be if they were a driver’s education instructor for more than 30 years.

That patience served him well as a driver’s instructor, a school teacher and as the president of Dowagiac Union Schools’ Board of Education the past six years.

After months of deliberation, Schmidt made the tough decision not to run for reelection this November after being on the board since 2012.

“I want to thank the board, the district and the community for allowing me to serve them all these years,” Schmidt said. “It truly was an honor. We accomplished a great deal,  and I’m confident the board will continue to be successful going forward.”

“His career proves dedication to not just our students, but the students across this country,” said Superintendent Jonathan Whan during last week’s board of education meeting. “Board members serve this community. It’s not a job, it’s a calling. Serving eight years on the board, through some difficult times, is a testament to what you do, believe and care about.”

Born and raised in Dowagiac, Schmidt was a member of the first graduating class to attend Dowagiac Union High School all four years when he graduated in 1964.

After graduating from Central Michigan University in 1968 with a degree in business education, Schmidt had teaching stints at Niles Community Schools and DUHS before he and his wife moved to Tucson, Arizona, where they lived for 28 years before moving back to Dowagiac in 1999.

Schmidt was hired by then-DUHS superintendent Larry Crandall as an instructor for the district’s Pathfinders adult education program before retiring in 2010.

“My wife asked me what I was going to do now that I was retired,” Schmidt said. “I told her that I would think of something.”

The newly-retired Schmidt was looking for something to devote his time to. When seats on the school board became available, Schmidt and current vice president of the board Ruth Ausra jumped at the chance. Schmidt became a board member in 2012 and was named board president by his peers in 2015.

“I looked at the district and some people were not comfortable with the way things were going,” Schmidt said. “Ruth Ausra and I joined forces and applied for the board, and the rest was history.”

Under Schmidt’s leadership, the board oversaw district milestones including the passing of two bonds totaling $37 million by district voters in 2015, which allowed the district to renovate the elementary buildings, pay for the construction of a competition gym at Union High School and construct ADA-compliant bleachers at Chris Taylor Alumni Field.

In addition to the bond-related improvements, Schmidt assisted with the hiring of two superintendents in Paul Hartsig and Whan, the installation of a new fence around Chris Taylor Alumni Field and the authorization of the district’s ICG building improvement plan that will provide additional parking space for the high school campus.

“A tremendous amount of work was involved with these projects,” Schmidt said. “Every time, the board stepped up. Right now, Whan is working with the board and I’m looking forward to good things in the future.”

According to Schmidt, the rapid evolution of technology is something the district has done its best to embrace.

“School districts have had to change their direction,” Schmidt said. “Technology has stepped in. When I started with Pathfinders, I determined we needed to come up with a better curriculum. New software allowed us to get a grip on the curriculum that students could buy into. Technology has helped us so much, but it can be challenging for faculty, parents, teachers and students to keep up.”

The COVID-19 pandemic impacted school districts across the state and Dowagiac was no different. Navigating the situation was a difficult task for Schmidt and the board.

“This year has touched on everybody,” he said. “Students, parents, grandparents and the community at large. It has been a very difficult time. Staying on top of things when the information changed hourly was a difficult task but we did our best and I’m confident the board will continue to do so.”

Schmidt’s exit leaves the board with a vacant, two-year term seat that must be filled by the district by Jan. 31. Schmidt has faith in the board as it prepares for the new year.

“I believe our board is very good,” Schmidt said. ” It does good work and the members work together as a team. Each member has everyone in the district in their best interest. They do a good job with that, and I applaud them for it. I believe we’re heading in the right direction. If the board, administration and staff hang on, good things will happen.”

DOWAGIAC — The new year will bring new leadership to the Greater Dowagiac Chamber of Commerce. After serving as Chamber... read more