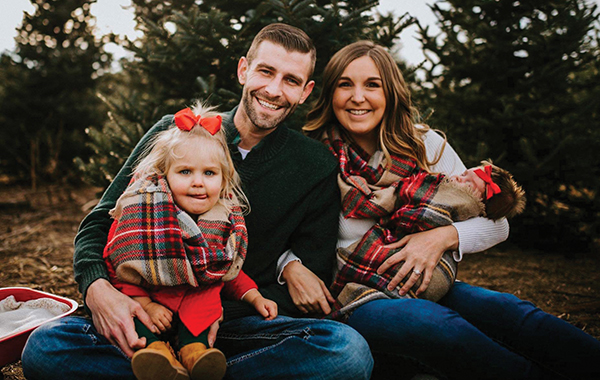 PORTAGE, Mich. — As semitrucks carrying the first approved COVID-19 vaccine rolled out of Pfizer’s parking lot in Portage, Michigan earlier this week, millions of Americans took a collective breath of relief. Among them was one Brandywine graduate whose work contributed to the vaccine’s development.

Daniel Elrod, a 2006 graduate of Brandywine High School, is the Senior Quality Operations Specialist — a part of the Drug Product Cleaning Validation Group — at Pfizer. Though he has been on paternity leave since his youngest daughter was born in November, Elrod spent much of the year working alongside Pfizer employees developing the vaccine as part of Operation Warp Speed.

When Pfizer’s vaccine was approved and began being distributed last weekend, Elrod and his teammates were full of emotions.

“I felt a number of feelings: excitement, pride and honor to have contributed to the manufacturing of the vaccine, as well as a sense of relief in knowing that help is on its way and that all our hard work has paid off,” he said.

Developed in under a year, medical experts have marveled at Pfizer’s ability to so rapidly develop a vaccine that is deemed both effective and safe, and was created using a method unlike any vaccine before it.

Unlike the flu vaccine, which uses an active or weakened infection, the COVID vaccine injects genetic material into those who receive it. The body’s immune system recognizes the injection as a foreign substance and begins to attack it, the same way it would a live virus.

Elrod, who has worked at Pfizer since September 2012, is part of the team that prevents cross contamination between products and equipment.

“I am the liaison between Cleaning Validation and the Validation Manager as well as other departments throughout Pfizer,” Elrod said.

He also oversees and trains outside contract workers who hope to later become employed by Pfizer.

Elrod’s team was responsible for ensuring the vaccine was safely produced.

“Simply put, the Cleaning Validation Group prevented the cross contamination during the manufacturing process of the vaccine to ensure the highest possible product quality and patient safety,” he said.

Like nearly every business across the globe, Pfizer has adapted its protocols and work environment to prevent the spread of COVID-19 across the company, which employs thousands in the Portage plant alone.

“It has been busy with an increased workload, however it is business as usual,” Elrod said. “Pfizer has implemented temperature screenings, mask wearing and social distancing is enforced in addition to the rigorous safety precautions that are in place on a daily basis.”

In his time at Brandywine, Elrod — better known as “DJ” among classmates — was a four-sport varsity athlete. He played basketball, baseball, football and soccer, and maintained a 3.75 GPA. After leaving Brandywine, he studied at Southwestern Michigan College for two years before transferring to Western Michigan University in Kalamazoo.

Following a lifelong love of science, Elrod ultimately earned a bachelor of science in biomedical science with a minor in chemistry.

“Even from a young age, I knew I wanted a career connected to science,” he said. “That, plus my passion for helping others has led me to a career in the pharmaceutical industry where I am able to assist in creating life changing medicines every day.”

Elrod encourages fellow Bobcats with big dreams to set their standards high and chase after their goals.

“Niles will always be home, but moving to a bigger city presented a wide variety of career pathways that I likely would not have been exposed to had I not moved,” he said. “It is important to understand that like any career, you are placed in situations to learn and grow, thus allowing you to move up in your career and gain larger opportunities. Don’t be afraid to start from the bottom and work your way up!”