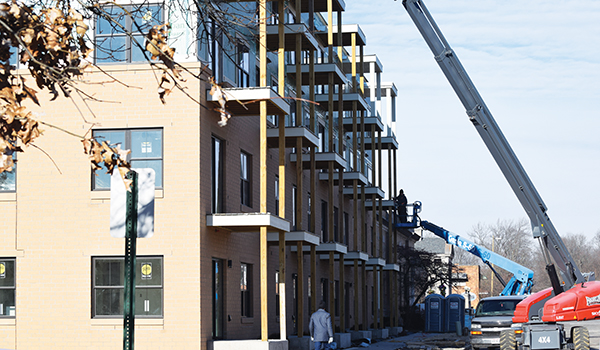 NILES — Throughout the past year, one of the most visible constructions underway in downtown Niles has been the Post Office Apartments, at the corner of E. Main and N. Fourth streets.

Four stories now rise up from behind the historical structure in the front, for which the apartments are named in honor of: Post Office Apartments.

“We are basically in the final push toward the finish,” said Sig Strautmanis, of General Capital Group, the developing firm responsible for this new structure, the Berkshire Niles apartments and the renovations at the Four Flags Plaza apartments.

The exterior work is wrapping up, just as the wintery temperatures begin to drop. Now, crews are readying the interiors.

“We are finishing the units. The kitchens are going in. The finished carpentry is happening,” Strautmanis said.

General Capital Group is planning to wrap up construction at the end of January, with residents moving in as early as February.

The property will be managed by KMG Prestige, which has been distributing marketing materials and taking applications for the apartments at its office in the Four Flags Plaza Apartments office.

“We have had tons of interest and lots of phone calls,” said Shelly Hopson, of KMG Prestige. “We are processing applications. We have many in process now, and we will have availability. We are encouraging people to come.”

The apartments are currently sight unseen, as the construction crews continue to put the finishing touches in place.

“[The rent] depends on income brackets,” she said. “The rent fluctuates.”

The fluctuating rents and downtown location are part of what both Hopson and Strautmanis hope will attract residents to the property.

“We consider this a workforce housing development,” Strautmanis said. “The demographic we target is the middle market. There’s a real need for middle market, affordable housing. This could be somebody who is starting off in a job, someone in a nonprofit or a frontline worker. This is intended for people who just maybe income constrained, but will need to pay their own rent.”

As the apartments have continued construction through the COVID-19 pandemic, Strautmanis counted the site lucky as one that was not touched by the virus — aside from a couple clarifications on if the work was allowed to continue under shutdown mandates.

“We’ve been doing all the safety protocols we can,” he said.

The construction process has been particularly interesting to Strautmanis due to the historical nature of the original Post Office building.

“The Post Office is the cornerstone feature of the whole project,” he said. “There’s going to be some beautiful spaces in the post office itself. The lower level of the post office will have community rooms and stuff like that.”

General Capital Group worked with the Michigan State Historic Preservation Office to ensure the integration of the new and old construction was done well.

“The cornice line across the post office, the little touches with the color of the brick being similar,” Strautmanis listed. “The little features that may not be obvious initially, they were done deliberately to make it all work together.”

Another feature Strautmanis was excited about was preserving some of the plaster arches that were discovered above the lobby’s ceiling. A suspended ceiling had been installed over the original construction. Some of the supports had actually been put into the original plaster arches.

In the process of learning about the historic preservation and marrying the new construction with it, Strautmanis hoped to show the group’s intentions with the space.

“I feel like it’s respectful to the original Post Office,” he said. “We tried to preserve the historic, but make it contemporary.”

CASSOPOLIS — An area man already in prison for a home invasion charge from Hillsdale County is staying in prison... read more