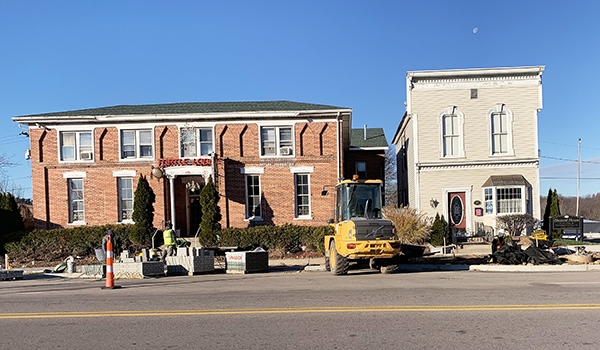 CASSOPOLIS — The Cassopolis Streetscape Project and the village’s beach project will be wrapping up for 2020 on Dec. 18, according to Village Manager Emilie Sarratore.

All of the projects are moving along, despite challenges presented by COVID-19 and orders from the state of Michigan, which have delayed or slowed down some of the projects.

Workers will take two weeks off for the holiday season before starting, weather permitting, in January.

“If it is not snowing, they will be back mid-January,” Sarratore said. “It will be weather dependent. They are about done with the pavers downtown before they wrap up next week. They have been working on Disbrow [Street] in front of the new municipal complex. They have the road in, and they are pouring the sidewalks today [Thursday]. They are doing some of the tree planting throughout the downtown.”

The new light poles for the downtown portion of the project should begin being installed next week, according to Sarratore.

“Progress continues,” she said. “Disbrow and Jefferson Street are up next, as well as the beach area. Somethings are weather contingent, like paving roads and things like that. That stuff clearly cannot be done until springtime.”

Sarratore said underground work would continue throughout the winter months if possible, and infrastructure progress will keep going as long as crews can continue working.

“They have continued to work on some of our step seating down at the beach,” she said. “They should be done with base of the pier this week. But due to COVID, railings and things like that are not in yet. That will still be blocked off until that stuff can be put in. We are really excited to see this continued project and keep Selge [Construction] moving as long as they can.”

From Lakeshore Drive to the beach area, the boardwalk project will go out for bid in January, Sarratore said. A target for that project to begin construction is spring or early summer. Grant dollars for that project got held up due to COVID, thus pushing the project back into 2021.

Park Shore Drive has finally received its permit from Canadian National Railroad to begin that project.

“That really held that project up all year,” she said. “We were scheduled to begin that in the spring, but the railroad would not issue us the permit. We do finally have that permit and that project will kick off in the spring as well.”

Selge Construction will be handling the Park Shore Drive project as well.

CASSOPOLIS — A weight was lifted off the shoulders of Woodlands Behavioral Health Network employees Thursday evening. During its regularly... read more