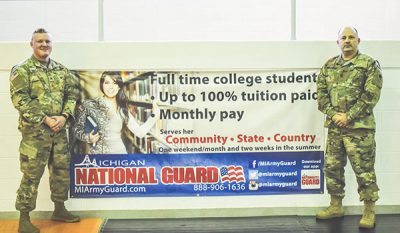 DOWAGIAC — The Michigan Army National Guard’s Dowagiac Armory is gearing up to help feed those who need it most.

The Armory will park one of its Light Medium Tactical Vehicles in the Family Fare parking lot and aims to fill the vehicle with food. Soldiers will be stationed in the parking lot to assist and load donations into the vehicle.

The National Guard is a reserve component of the U.S. Armed Forces that can be deployed or mobilized for federal and domestic missions. The Guard responds to domestic emergencies, overseas combat missions, counterdrug efforts, reconstruction missions and more.

Composed of National Guard military members and units from each state and territory, more than 350,000 people are currently serving. Brautigam emphasized that the National Guard is a part of the U.S. Army.

“The Army National Guard is really the community piece of the military,” said Sergeant First Class Jason Brautigam, the National Guard’s lead recruiter for the area along with Staff Sergeant Kelsey Poirier. “A teammate did a food drive for their community before Thanksgiving and we thought it would be a good idea. We have the time on our hands right now. We are recruiters and part of our job is to be in the community, so we thought, ‘let’s do a food drive, bring awareness to what we’re about and help families in need.’”

The donations will be donated to Liberty Chapel, 309 Dewey St., Dowagiac, where it will be used to stock its food pantry and help families struggling this year to put food on the table.

“We won’t turn anything away,” Brautigam said. “If the vehicle fills up, we will unload the truck at the armory and drive it back.”

The food drive means a lot to Brautigam, who has seen the impact a lack of food can have on the community.

“I’ve had recruits join because of the benefits they can receive in the future,” he said. “Some of them come from struggling families. I have donated food to recruits’ families with money from my own pocket. When they enlist, they become my family, too. We know the struggle is out there. With COVID, there’s more need this year than ever.”

DOWAGIAC — A local organization is doing its part to help provide food for the community. The Dowagiac Rotary Club... read more