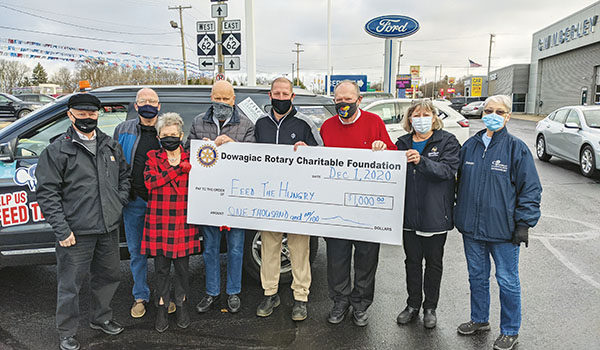 DOWAGIAC — A local organization is doing its part to help provide food for the community.

“I think it’s great that we’re helping out the community,” Merrill said. “This is just one way that we can contribute and be part of what needs to be done.”

All donations to the campaign go towards buying food items to help feed families in the Cass County area. For every $1 Feed the Hungry raises, ACTION Ministries, which helps facilitate the program, is able to purchase $6 worth of food.

“Larry [Crandall] came to me and said that [Rotary] had two donations combined for $1,000,” Wimberley said. “It’s really nice to see the Rotary Club continue its support because everything stays right here in our community. There are no administrative costs going out to anybody. Everyone who helps volunteers so that the only thing we’re spending money on is food.”

This is the second major gift Rotary has made to food relief in Dowagiac during the pandemic, having donated $2,000 to ACTION Ministries in the summer.

The idea to donate to the Feed the Hungry campaign was brought up during the Rotary Club’s Nov. 19 meeting. After deciding as a club to donate, Cochrane received approval from the Rotary board, and Crandall was approved by the charitable foundation. According to Cochrane and Crandall, everything came together in just four days.

“It was suggested at our last meeting,” Cochrane said. “We have some charitable funds available, and they’re working very hard on this program. It’s really important this year, and we should give a gift. I did a poll of the board afterwards and they all said sure, and then it got to Larry and the foundation.”

“We’re just fortunate enough that we’re in a position to be able to do this,” Crandall added. “Hopefully this will help people during this time of need because there’s no question the need is there. It came together quickly but everything went well, so I’m happy.”

This year, the Feed the Hungry program hopes to exceed the $30,000 it raised last year. According to Wimberley, the campaign has raised $17,500 to date.

Donations will be turned over to Dowagiac’s ACTION Ministries, a collaboration of six area churches that administers to individuals and families in the Dowagiac area.

“We’ve got a great group of people,” Wimberley said. “Jim [Allen] spearheads it, and we have a lot of local community leaders who get involved, which has probably been the best thing about this initiative. It’s been a great program, and we’re very proud.”

DOWAGIAC — The Dowagiac District Library is in the process of a much-needed facelift. Phase Two of the library’s expansion... read more