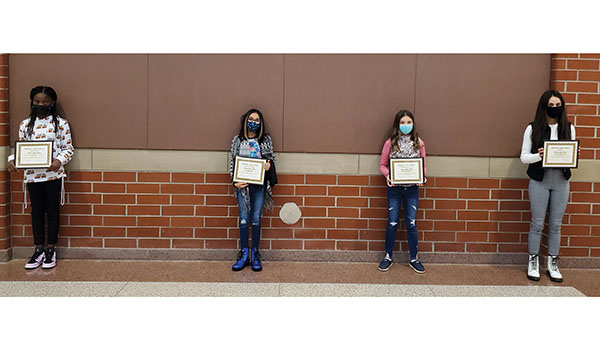 DOWAGIAC — Parents and families flocked to Dowagiac Middle School Monday to see their children recognized by the school district.

The Dowagiac Board of Education announced the district’s students of the month in the DMS Performing Arts Center before the start of its monthly meeting. One student was chosen from each school after a nomination from a staff member. Each student of the month was presented with a certificate acknowledging their efforts and a T-shirt with their name on it.

Fifth-grader Kendall Kroepel was chosen as student of the month for Kincheloe Elementary, and was nominated by her teacher, Jennifer Wilson.

“Kendall is a very good student,” Wilson said. “She has a kind, loving heart and is a good friend. She’s a hard worker, and she is very genuine. She is a sweet girl, and I think all of her peers would agree with that. I’ve enjoyed having her face to face and virtually.”

For Patrick Hamilton Elementary, fifth-grader Je’Mela Bonds was named student of the month. Bonds was nominated by her teacher, Samantha Haner.

“Je’Mela is a very hard-working student and a role model in school,” Haner said. “She excels in all areas but stands out in math, which is her favorite subject. She enjoys reading and is proud of how quickly she is able to learn new things. She rarely missed a lesson when we were learning from home, even if one of us was having technical difficulties there. She has been a joy to have in class both in person and in distance, and I look forward to watching her continue to grow this year.”

Seventh-grader Tatum Richter was named student of the month at Dowagiac Middle School after being nominated by her English teacher, Caroline O’Toole. Though Richter nor O’Toole were not in attendance at Monday’s meeting, O’Toole wrote a letter that was read aloud by school principal Sean Wightman about why Richter was deserving of the award.

“Tatum is one of the most polite students I know. She always does her best at completing her assignments and is willing to help others who need it,” O’Toole wrote. “Her attendance is outstanding and her positive attitude cheers everyone up immediately this year. When asked if she had any advice to give other students, she had this to say, ‘Always be kind to people and pay attention in class instead of messing around. Listen and follow the rules at school and don’t play games because that can get you into trouble. Always do your best even when things aren’t easy.’”

From Sister Lakes Elementary, fifth-grader Aracely Solis was named student of the month. Solis was nominated for the award by her teacher, Alicia Stout.

“Aracely was chosen by me because she is an exceptional student,” Stout said. “She has many other students in class that look up to her because she is outgoing and a great leader. Even when there are tough decisions to be made, Aracely always makes the right choices. I can always count on her to do the right thing.”

Lily Lebeda, a fifth-grader at Justus Gage Elementary, was selected student of the month for her school and was nominated by her teacher, Jamie Hannapel. Lebeda and her family chose to stay home, but Hannapel was present to tell the audience why Lebeda deserved the award.

“When I think about this inspiring young person, the words that come to mind are hardworking, focused and appreciated,” Hannapel said. “She is a model student. As a teacher, I truly appreciate the fact that even when concepts are difficult, she will ask questions and work on assignments at home. She waits patiently if others’ needs outweigh her own and offers help to those who are struggling. I am comforted to know that no matter what, Lily is going to make our community proud.”

“Juliana is both respectful and kind to her teachers and peers,” Dwyer wrote. “She is always willing to help out students and teachers when they need help. She’s very trustworthy, has a positive attitude and is a joy to be around. She is an ideal choice for student of the month not only because of her accomplishments, but because of the positivity she brings to the room. She’s a great representative of the Dowagiac Union High School community.”

Following a round of applause from those in attendance, the students were congratulated and given the opportunity to take photos with their families.

One arrested for armed robbery of downtown Niles bank

NILES — An arrest has been made in connection to an armed robbery that occurred at a bank in downtown... read more