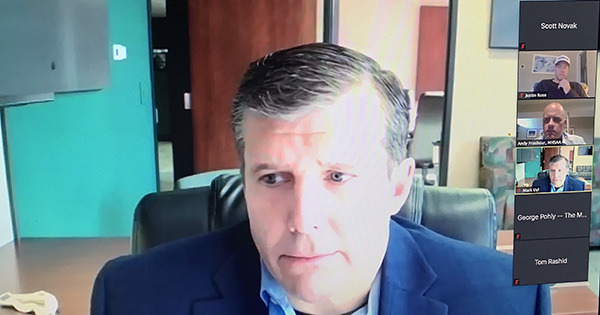 NILES — The goal for the Michigan High School Athletic Association for 2020-21 was to have three complete sports seasons.

The MHSAA was well on its way to completing the first leg of that goal when COVID-19 upped its game and forced the state of Michigan to roll back into Phase 2 of its reopening plan Sunday night.

Gov. Gretchen Whitmer, along with the Michigan Department of Health and Human Services, announced that all sports, except for college and professional, will be shut down in hopes of slowing down the spread of the COVID-19, which has increased dramatically in Michigan over the past couple of weeks.

That means the suspension of the fall sports tournaments in volleyball, football and girls swimming and diving. It also means that winter sports practices, many of which were scheduled to begin Monday, are also suspended.

The order goes into effect on Wednesday and continues through at least Dec. 8.

Mark Uyl, executive director of the MHSAA, addressed the media Monday afternoon via Zoom on the state’s plans moving forward, including completing the girls volleyball, girls swimming and diving, and the 8- and 11-man football playoffs.

Uyl said the representative council is scheduled to meet on Wednesday to finalize plans to complete the fall sports tournaments and when to begin winter sports practices and competition.

“For all of our three sports, we will have a plan that completes those tournaments in the calendar year 2020,” Uyl said. “Certainly, for us to try to push back later in the spring from right now — we’re going to take the emergency order at its face value. We’re going to wait until Dec. 8, and hopefully, our numbers get to a point to where we can resume practice and competition. We’ll try to get those three fall sports tournaments completed by Jan. 1.”

The announcement of the plan will be Wednesday afternoon, according to Uyl.

Of course, that plan will be based on the state of Michigan not extending its order past the Dec. 8 date. If the suspension continues beyond that, the state will have to adjust and consider other options, Uyl said.

“The challenges that we have right now are the three remaining fall sports as well as what does winter look like,” he said. “Can we still provide a quality winter tournament that culminates with some kind of a postseason experience? What does that look like and how does it fall on the calendar? I do think the experience of the past eight months does put us in a better position now than [where we were] last March.”

Last Friday, the state announced that the 11-man football finals would be Dec. 4-5 at Ford Field in Detroit. With that date off the table, Uyl said Ford Field would still be available for later in the month despite the Lions having a pair of home football games.

“We have already communicated with Ford Field,” Uyl said. “Obviously, our dates of Dec. 4 and 5 are off the books, but they have been excellent to work with. Once we finalize the schedule, if we are able to resume football in December after the three-week order, that we will find two new dates. There is a lot of flexibility in December, and the thing is, it might not fall on a Friday or a Saturday.”

Uly was also asked if he was worried about having to cut the season short as the state had to do last March, as well as canceling the winter sports season.

“I think this is different than where we were at last March and April,” he said. “This was a new phenomenon to all of us. Certainly, with March and April, we had plans the entire time to complete winter as well as to have a spring season. Of course, we ran out of runway when the governor made the only call that she could at the time and that was to end in-person instruction. We’ve got two months-plus of data where we’ve shown that not only can sports be played, they can be done safely.”

Uyl left open the possibility of concluding the fall sports season and starting the winter sports seasons without spectators or going back to the two-ticket per player rule that the state used to get the season under way.