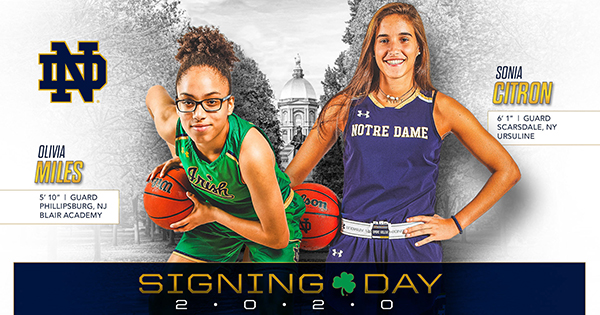 NOTRE DAME, Ind. — It is her first year at the helm, and Notre Dame women’s basketball head coach Niele Ivey landed a top-5 recruiting class in Sonia Citron and Olivia Miles. Both top prospects signed their national letters of intent this past week and joined a historic lineage of guards a Notre Dame.

“From the moment I was hired, I identified exactly who I thought would help continue the legacy of excellence at Notre Dame,” Coach Ivey said. “I am so blessed and fortunate to welcome two of the top premier guards in the 2021 class. They exemplified everything I was looking for as I began to build this new era: strong work ethic, high character, confidence, competitive mentality and swagger.

“There is no doubt that they both will fit in perfectly to our style of play and make an immediate impact on our program. The future is bright with the additions of Olivia and Sonia, and I’m so excited to have the opportunity to coach and mentor them. They will always have a special place in my heart for being a part of my first signing class.”

A 6-1 guard hailing from Scarsdale, New York, Citron ranked No. 16 overall in her class and sixth at her position. Citron is coming off of a banner year at The Ursuline School, where she led the Koalas to a 24-0 record and first Section I title since 2003. Citron was named the MVP of the Section I Class AA Tournament before the NYSPHSAA canceled the remainder of the state finals due to Covid-19.

“Notre Dame checked all the boxes for me: great academic school, great women’s basketball program, beautiful campus and wonderful facilities,” Citron said. “When visited, I was intrigued by the family atmosphere and all the tradition that they have had for generations. Most of all, I love the coaching staff led by Coach Ivey, a basketball icon. I love their passion, energy, knowledge of the game and their style of play. I am looking forward to learning, competing, growing as a person and winning championships at Notre Dame.”

In fact, Citron has averaged over 20 ppg in all three years at Ursuline and has already broken the school’s records in both career points (1,874) and rebounds (1,035).

She has also gone 65-5 at Ursuline over the past three years and is a three-time All-State honoree.

“I am thrilled to welcome Sonia to our family. She is the complete package on both ends of the floor,” Ivey said. “She has the capability to stretch the defense with her 3-point shooting range, attack off the dribble, distribute, and post up smaller defenders with her size. On the defensive end, she uses her athleticism to rebound and loves to take on any challenges. Mostly I am impressed by her unselfish persona, high IQ and willingness to do whatever it takes to help her team win. She will be perfect for the culture and standard I am creating here.”

A 5-11 guard hailing from Phillipsburg, New Jersey, Miles ranked No. 8 overall in her class and the second-ranked point guard. Miles attends Blair Academy, where last season she averaged 13.6 points, 8.1 rebounds and 7.6 assists.

In fact, Miles led Blair Academy to a Prep A State Championship in 2020, its first since 2017. The two years prior, Miles had Blair on the cusp, recording back-to-back state runner-up finishes. Not to mention, Blair Academy have won three straight MAPL championships. All-in-all, Miles enters her senior year with a 69-19 prep record.

“I knew Notre Dame was the perfect fit for me as soon as I got to know the supportive and loving environment that I was going to be surrounded with during my time there,” Miles said. “I knew that’s somewhere I wanted to go and I feel like my education is so important. It’s a well-rounded school where you get the best of both world in basketball and academics. Also going to be coached by someone I love, someone so relatable and a national champion.”

The point guard has achieved the not so easy feat of earning First Team All-State honors in all three years, and has been recognized by USA Today as one of the best in New Jersey. When asked what the highlight of her prep career has been so far, Miles cited scoring her 1,000th career point last winter.

“Olivia is a special talent and one of the most dynamic guards I’ve ever seen,” Ivey said. “She has incredible quickness, tremendous vision and the ability to make everyone around her better. She is a poised floor general that plays at a fast pace and brings a unique flair. She is great at attacking 1-on-1 and is a true competitor. From her no-look passes, deep scoring range and elite finishing package, she will bring a whole new level of swag to South Bend. I can’t wait to see her flourish in our system and help lead our program back to the top.”

Fall 2021 inside the Rolfs practice facility will not be the first time Citron and Miles share a court together as teammates. Both future Irish were members of the U16 USA National Team in 2019, where they brought home the gold medal in Chile after an unblemished 6-0 record.

“I’m actually really, really good friends with her,” Citron said of Miles. “Before we were on the USA team, we played together in a few summer tournaments. We didn’t really talk a lot early on, but we got closer playing together and really wanted to be teammates in college. It’s something we talked about quite a bit.”

Both Citron and Miles played AAU ball together with the Philadelphia Belles. In fact, that’s not the only Notre Dame connection with that program. In June of 2019, Miles and current freshman Alli Campbell won the Nike Girls EYBL together in Indianapolis.

Citron and Miles were just named to the Jersey Mike’s Naismith National High School Girls Trophy Watch List this past Tuesday. The list acknowledges the top-50 high school girls basketball players in the country, which will eventually get narrowed down throughout the season to a Naismith Trophy Player of the Year.