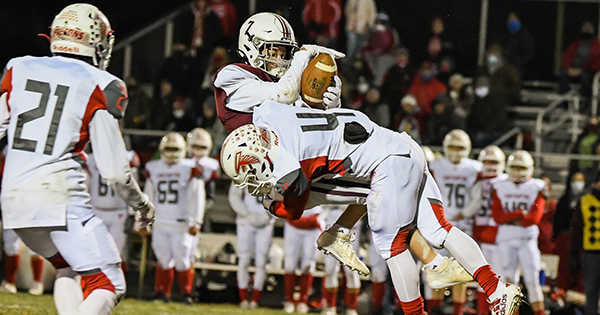 BUCHANAN — The Buchanan football team did not have the start to the game it was looking for against visiting Constantine.

The Bucks allowed 28 unanswered points to start the game as the Falcons (7-2) won 55-28 Friday in the Division 6 district championship game.

Buchanan finishes the season with an 8-1 record.

Buchanan’s defense, which entered Friday’s game having only given up two touchdowns all season long, struggled mightily against the big-play capability of Constantine’s offense.

“We’d have them in third and long and one guy misses his responsibility and they gash you,” said Buchanan coach Mark Frey. “That’s why they run that offense. They’re successful at it.”

Trailing 28-0 early in the second quarter, the Bucks refused to back down. A Constantine fumble was recovered by Buchanan deep in Falcons territory. A few plays later, Connor Legault connected with Johnny Rager on a 15-yard touchdown pass to get the Bucks on the board.

A few possessions later, a six-play, 64-yard Buchanan scoring drive capped by a 10-yard run by Keeghan Pelley and an extra point cut Constantine’s lead to 28-14 at halftime.

“We made too many mistakes in the first quarter,” Frey said. “In the second quarter, we started making plays we knew we could make.”

Buchanan starts the second half recovering a Constantine fumble deep in Falcons territory but were unable to take advantage due to a fumble of its own being recovered by Constantine’s Isaac Hall.

A few plays later, Constantine’s Lucas Hagenbuch broke loose for a 72-yard touchdown run. The Bucks would never get closer than three scores for the rest of the game.

“We had the momentum out of the half, but we turned the ball over,” Frey said. “I think if we put it in there, it’s a different game. Constantine’s a great team. They have a huge tradition of success and that’s a program we want to emulate.”

Constantine outgained Buchanan 542-188 in total yards of offense, including a 444-43 advantage in rushing yards.

“We struggled passing, which has been our strong suit,” said Buchanan senior Gavin Fazi. “They just drove it down the field and scored a couple of big plays to put us down and we couldn’t come back.”

Buchanan quarterback Connor Legault completed 11 of 25 passes for 145 yards, two touchdown passes and three interceptions. Darius Griggs caught four passes for 55 yards and one touchdown and Johnny Rager had two for 52 and a touchdown.

Senior Gavin Fazi turned in a solid performance in his last game as a Buck. He caught four passes for 31 yards and returned a kickoff 99 yards for a touchdown while adding a team-leading 11 tackles on defense.

While the loss was not the way Buchanan wanted to end its season, the Bucks have much to be proud of. The team earned the third undefeated regular season in program history and defeated rival Brandywine twice and bested Niles in the first game between the two programs since 1981.

“They’re disappointed, but they can’t hang their heads,” Frey said. “This town loves them, they’ve had an amazing year. We haven’t beat some of the teams we’ve beaten this year in a very long time. Just seeing the success they’ve had, I hope they can use this experience later on in life.”

Cass County Board of Commissioners to return to in-person meetings