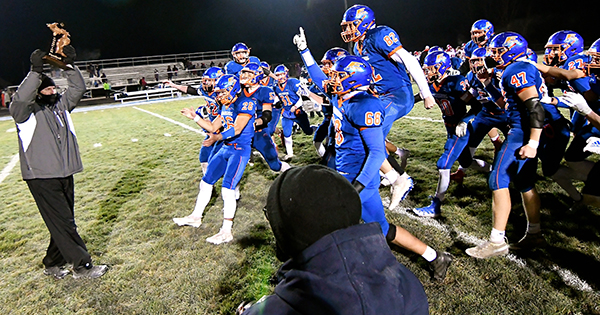 EDWARDSBURG — For the second time in four weeks, Paw Paw traveled to Edwardsburg searching to snap a six-game losing streak at the hands of the Eddies.

The Red Wolves headed back home having lost seven in a row, following their 60-6 setback.

The win advances Edwardsburg to the Division 4 Regional championship game against Grand Rapids South Christian. The Eddies will host the game at 7 p.m. at Leo Hoffman Field.

Despite running 11 less plays than Paw Paw, Edwardsburg held a 319-144 advantage in total offense. The Eddies rushed for 313 yards, led by Gavin Houser, who had one carry for 68 yards. Quarterback Jacob Pegura added 54 yards on four carries, with Logan McColley, Drew Bidwell and Ethan Cebra all rushing for more than 40 yards.

Edwardsburg set the tone in the opening 12 minutes that the Red Wolves would not be leaving town with the championship trophy.

The Eddies scored three times to take a 20-0 lead. Drew Bidwell had touchdown runs of 27 and one yard, while Logan McColley added a 3-yard run, the first of two on the night for him.

Edwardsburg tacked on two more touchdowns in the second quarter to open up a 36-0 halftime advantage.

Pegura scored from 18 yards out and McColley added a 4-yard run.

The lone score of the second half came in the third quarter when Mike Pryor capped a drive with a 1-yard run.

Defensively for the Eddies, Jacoke Luster had a pair of interceptions, while Noah Houseworth had 5.5 tackles and Gavin Houser 3.5 stops.

South Christian defeated Hamilton 56-14 to improve to 8-1 on the season. The Sailors and Eddies met previously in the Division 4 state semifinals with South Christian pulling out the 50-48 victory in 2014.