But these four athletic directors also are known in their local and statewide sports communities for the positive experiences they help provide students — their own as well as those who take part in the same leagues or tournament events they frequently host.

To honor their often-unsung work in creating these experiences for athletes, all four have been named recipients of the Michigan High School Athletic Association’s Allen W. Bush Award for 2020. 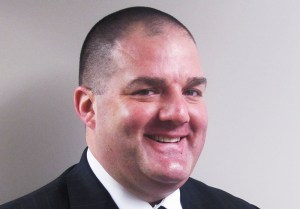 Vicksburg Athletic Director Mike Roy is a recipient of the 2020 Bush Award from the MHSAA.

Al Bush served as executive director of the MHSAA for 10 years. The award honors individuals for past and continuing service to prep athletics as a coach, administrator, official, trainer, doctor or member of the media. The award was developed to bring recognition to men and women who are giving and serving without a lot of attention. This is the 29th year of the award, with selections made by the MHSAA’s Representative Council.

“Leaders among peers, ceaseless dedication, never saying ‘no’ when needed — these are how this year’s Bush Award honorees are described by their colleagues, and how we’ve come to know them as well,” said MHSAA Executive Director Mark Uyl. “What they give willingly for school sports goes far beyond awards they’ve received, and at the same time often receives little attention. We’re delighted to recognize all of their continuing contributions.”

Johnston has begun his 39th year in education, with the last eight for East Grand Rapids Public Schools, where he has led one of the state’s most successful athletic programs — EGR, which offers 34 varsity sports, was named a Michigan Exemplary Athletic Program in 2018 by the Michigan Interscholastic Athletic Administrators Association. Johnson was chosen as his region’s Athletic Director of the Year by the MIAAA in 2017. He previously served as a teacher and coach at Grand Rapids Catholic Central, and then as an athletic director and principal at Hastings.

He has made significant contributions to Michigan’s largest high school league, having served as president, vice president, secretary and realignment chairperson for the Ottawa-Kent Conference, and hosted various MHSAA Tournament competitions for the District, Regional and Finals rounds. Johnston also has served on multiple MHSAA sport committees and its board of canvassers, and as part of the Scholar-Athlete Award selection committee. Additionally, he has served as an instructor for the MHSAA’s Coaches Advancement Program and as a program presenter at conferences for both the MIAAA and National Interscholastic Athletic Administrators Association — and served as Michigan’s delegate to the latter.

“Tim has always been incredibly positive in advocating for kids,” Uyl said. “I’ve known Tim for years as a principal and as an athletic director, and there’s absolutely no one who better sees the big picture of how academics and athletics fit together.”

Mattson also is a frequent MHSAA Tournament host and participated on sport committees for skiing, football, basketball, cross country and track and field, and has served as an MIAAA regional representative and as secretary for the Big North Conference. He received MIAAA regional Athletic Director of the Year awards in both 2008 and 2018, and was selected as the Upper Peninsula Athletic Director of the Year in 2006.

A current member of the MHSAA Representative Council — representing Class C and D schools in the northern Lower Peninsula — Mattson is a graduate of L’Anse High School and earned his bachelor’s degree and then his master’s in educational administration both from NMU. While at NMU and into his tenure at Marquette, Mattson also was a registered MHSAA official in football and basketball for a decade and briefly for softball and volleyball.

“Mark, having served his career in northern Michigan and the Upper Peninsula, always brings a unique perspective on how the largest schools survive in northern Michigan,” Uyl said. “Schools like Marquette and Traverse City Central face a unique challenge. He’s always been an advocate for schools with those unique circumstances – but also for all schools up north, and especially now as part of the Representative Council.”

Roy is a graduate of Paw Paw High School who returned to Michigan after earning bachelor’s and master’s degrees — the latter in curriculum and instruction — at the University of Nevada-Las Vegas, where he also was a member of the football team for two years. He is into his 22nd year as an athletic administrator, serving three years at Lawton before joining the Vicksburg administration at the start of the 2001-02 school year. He has hosted more than 100 MHSAA postseason events and numerous CAP sessions while also serving as a CAP instructor, and his Vicksburg program received the Exemplary Athletic Program award in 2020.

Roy served as president of the MIAAA during the 2019-20 school year and has made vast contributions as part of the athletic directors’ professional organization with more than 15 years as a regional representative and 10 times serving as the state’s NIAAA delegate at the National Federation of State High School Associations national conference. He has served more than a decade as a Leadership Training Institute instructor for the MIAAA and as part of the NIAAA national teaching faculty.

“Mike has been incredibly giving with his time, especially with his leadership with the MIAAA,” Uyl said. “He has a can-do attitude, whether it be in hosting events or with other problem-solving he’s provided our entire MHSAA staff over many years.”

Wilson also is a frequent host of MHSAA Tournament events — he hosted more than 10 during the 2019-20 school year alone — and also has served on various MHSAA committees. He has served as president of the Big North Conference and provided his expertise to the local Little League and youth football boards. He was named his region’s Athletic Director of the Year by the MIAAA in 2016.

“Christian has been a successful administrator for many years because of his outstanding temperament and the way he connects with people,” Uyl said. “He’s someone who takes the work seriously, but never takes himself too seriously. He has served as a mentor to so many, and he’s very gifted at building relationships. At the end of the day, that’s what our business is about — those relationships.”

NILES TOWNSHIP — On Wednesday, Nov. 4 the Niles Charter Township Board of Trustees met for a special meeting to... read more