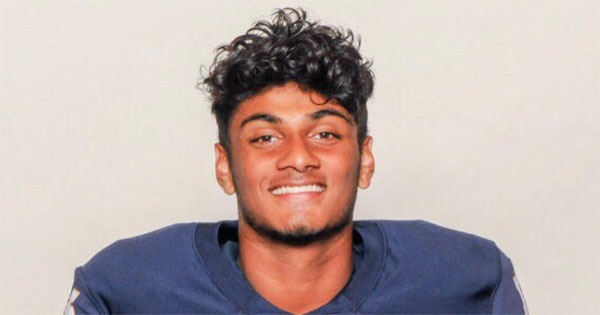 NOTRE DAME, Ind. — University of Notre Dame senior running back Cameron Ekanayake has been named a finalist for the prestigious Rhodes Scholarship.

The scholarship, which supports scholars through postgraduate education at the University of Oxford, is highly selective, choosing candidates based on academic excellence, a commitment to changing the world, a concern for others’ welfare, an awareness of the state of the world and the promise of leadership.

Ekanayake is a science-business major, a track of study that integrates the four basic science areas with the basic areas of business. He owns a 3.71 GPA and is a two-time dean’s list honoree, maintaining a 15-credit average course load each semester in addition to responsibilities as a football student-athlete, also volunteering to gain clinical experience. On the Medical College Admission Test, Ekanayake scored in the 94th percentile.

In his postgraduate studies, Ekanayake aims to study economics and public health in an effort to aid medical efforts in underserved areas, providing support for important research that cannot be done in the absence of adequate resources.

“Throughout my experiences, I have learned that there is no shortage of good people in the world, people who truly want to help others,” Ekanayake shared. “However, what I quickly realized was that this ‘want’ to help others was not limited by how compassionate people were, but rather by other factors such as economic, institutional and political constraints. I want to focus on these factors that are keeping these people from reaching their full potential to help others.”

After a potential Rhodes Scholarship, he hopes to attend medical school and pursue a specialized cardiothoracic surgeon career.

The walk-on senior has been a member of the football team for four seasons, joining as a freshman in 2017. Ekanayake serves as a leader on the Irish scout team, and saw his first-career game action in 2019 vs. Bowling Green.

Throughout his time at Notre Dame, Ekanayake has served as a research assistant in multiple labs at Notre Dame, most recently in the White Lab at Harper Cancer Research Institute, where he works to conduct research on how intracellular pH dynamics regulate proteins, pathways and cell behaviors, with approaches across experimental scales. He has also volunteered and shadowed with area physicians and in emergency rooms. In 2018, he traveled to Sri Lanka to serve as a public health intern and clinical shadowing participant, assisting with patient intake and care and observing surgeries.

In the South Bend and Notre Dame Community, Ekanayake is highly active, volunteering regularly with the Catholic Worker in the area. He is a founding board member and co-president of Life Worth Living ND, a student club dedicated to supporting people with developmental disabilities and challenges. The club works closely with Misericordia Home in Chicago with the goal of bringing more awareness to the needs of people with developmental disabilities and sponsor fundraising events.

He has also volunteered for Navodaya Special Education School, a non-profit organization for underprivileged and economically and socially disadvantaged children in Sri Lanka, for seven years. Other service projects he has contributed include working with the Kelly Cares Foundation, the Golden Living Nursing Home and CDS Tutoring for Brilliant Minds, a charitable tutoring service of which he is a co-founder executive director.

A senior from Niles, Michigan, Ekanayake ranked first in his class at Edwardsburg High School.

LANSING — Now is a popular time of the year for fall agri-tourism activities in Michigan like visiting cider mills,... read more