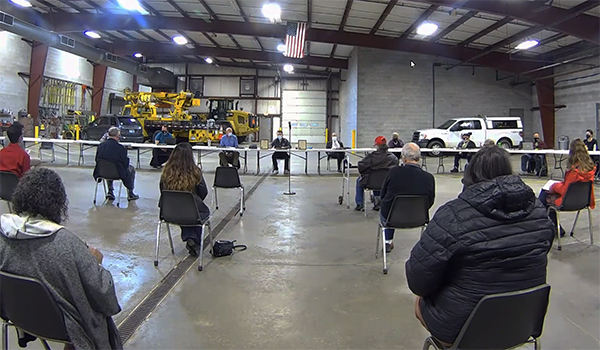 Attending in person were more than 10 individuals, as well as participants online using a virtual Zoom access to the same meeting. Concerned citizens and business owners made their voices heard about the recent shooting that occurred on Fourth Street in Niles on Saturday morning. A 2 percent raise for City Administrator Ric Huff was discussed in closed session at the end of the meeting, and approved by all city council members in a unanimous vote.

During public comment, Stacy Montague-Soltas approached the microphone to address the council.

“I’ve come to talk about the shooting that took place over the weekend,” Montague-Soltas said. “My home was a victim of that, and received two gunshots through our house, as did several businesses in the area. I do believe this is a product of the Bell Building, that has events. A lot of this occurs at night. We had a shooting three years ago in February 2017. Fifteen shots were shot, and the AT&T building was hit.”

She did not propose a solution, but said she just wanted to bring it to the council’s attention.

Shelton indicated he and Montague-Soltas had spoken previously about the incident, and thanked her for coming.

“Obviously, a very serious incident occurred,” Shelton said. “I’m hopeful that the city can continue to address these issues and move forward.”

The incident Montague-Soltas referred to took place on Saturday morning, around 2:05 a.m. Businesses including Leader Publications, Off Main Street Salon and Shelf Life Bookstore were damaged with multiple bullet holes.

Later in the meeting, the council was asked to vote to authorize the mayor to complete required certifications to received additional funds from the Coronavirus Aid, Relief, and Economic Security Act. In the city council report prepared by Sanya Vitale, Niles community development director, Vitale said her department has been closely monitoring the use of CARES Act funding in the community.

A second round of CARES Act funding increased the city’s allocation from $68,824 to $238, 881.“These funds were allocated to communities with expected higher rates of evictions,” Vitale said. “As such, these funds are being suggested to be used for housing and homeless activities.”

The measure passed in an all-in-favor vote, with just council member Gretchen Bertschy absent. However, council member John DiCostanzo voiced his opinion on how the funding should be used.

“I want to thank Ms. Vitale for her hard work and for working with the homeless,” DiCostanzo said. “I still would like to see us prioritize the aid that we are receiving. This is federal aid, going toward people we know are from our community. Try to avoid making it so comfortable for out-of-town, homeless people to come and camp in our city.”

Council member Jessica Nelson, during council reports, voiced her support of Sanya Vitale’s efforts and community members working toward a solution for the homeless in Niles.

“As someone who walks or runs every single morning in the city, I’ve seen a difference,” Nelson said. “I would imagine other people have seen it too. I know the efforts we are putting into this are paying off.”

Mayor Nick Shelton also proclaimed the week of Nov. 1 through 7 to be Salvation Army Week, and the month of November to be Native American Indian Month.