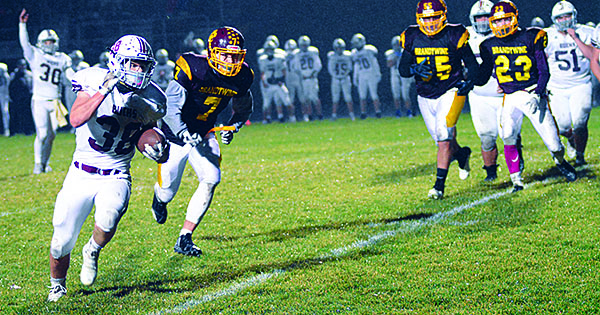 Buchanan (6-0) will host Fennville (0-6) in the opening round of the MHSAA football playoffs. (Leader photo/MAXWELL HARDEN)

DOWAGIAC — The opening round of the Michigan High School Athletic Association football playoffs will find Brandywine, Buchanan and Dowagiac at home to kick off the postseason.

Niles (1-5) and Cassopolis (2-4) will both be on the road for the opening round. The Vikings will face former SMAC West Division foe Lakeshore (4-2), while the Rangers will take on Southwest 10 Conference opponent Mendon (5-1).

Undefeated Edwardsburg received a first-round bye in Division 4. The Eddies will host the winner of the game between Wolverine Conference opponents Plainwell (3-2) and Vicksburg (4-2).

Niles is playing in Division 3. The winner of its game against Lakeshore will face either Sturgis or Coldwater.

Dowagiac is playing in Division 5. The Chieftains or Rams will face either Berrien Springs or Lansing Catholic (4-2) in the district championship game.

Buchanan and Brandywine are playing in Division 6. The Bucks and Bobcats could play for the second time in three weeks should both teams win their playoff openers.

In Division 8, Mendon and Cassopolis were scheduled to play Oct. 16, but the Rangers were forced to cancel the contest due to COVID-19 issues.

District semifinals for 11-player and regional semifinals for 8-player will follow during the weekend of Nov. 6-7, and the weekend of Nov. 13-14 will have district finals in the 11-player playoffs and regional finals in the 8-player playoffs. Both rounds will be played at the site of the highest-ranked team which was victorious in the previous round of play.

Regional finals in the 11-player playoffs will take place Nov. 20-21, at the site of the highest-ranked team that was victorious in district final play. The 8-player playoff semifinals will take place on Nov. 20-21, pairing the winners of Region 1 vs. Region 2 and the winners of Region 3 vs. Region 4, at the sites of the highest-ranked team.

Semifinal games in the 11-player playoffs will take place Nov. 27-28, pairing the winners of Region 1 vs. Region 2 and the winners of Region 3 vs. Region 4. Highest-ranked teams will host unless participating teams are 200 or more miles apart; in those cases, the MHSAA will assign the game at a prearranged site if one can be secured in a reasonable location.

All playoff tickets will be sold online only via GoFan at gofan.co/ to provide for a cashless and contactless purchasing process that also allows for contact tracing. Tickets for single-session pre-district, district and regional games are $6. Single-session semifinal tickets are $8. A per-ticket convenience fee will be applied.

WATERVLIET — The Buchanan girls cross country team is peaking at the right time. The Bucks qualified for the regional... read more