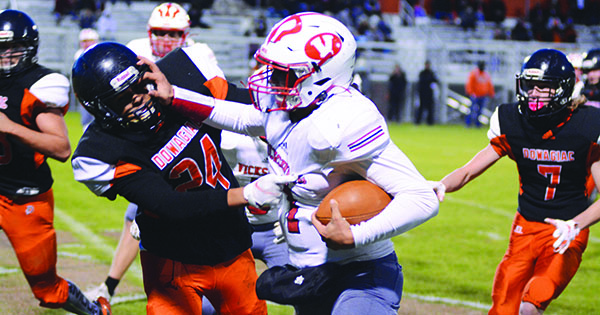 Turnovers, not history will make the difference Friday night

DOWAGIAC — For the players, and most of the staffs, the Dowagiac-Niles Black & Blue Rivalry is the stuff of legends.

For the host Vikings, assistant coach Paul DePoy played against the Chieftains. On the other sideline, Dowagiac Head Coach Randy Brooks and Assistant Coach Pat Lyle were on different staffs that coached against the Vikings.

Both coaching staff have spent time this week familiarizing their teams with the history of the series. When it ended in 2005, the 102nd meeting, it was one of the longest continually running series in the entire state of Michigan. 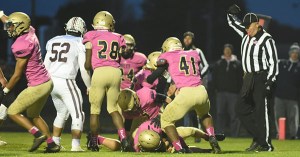 The Vikings have also leaned on their defense during the 2020 season. (Leader photo/SCOTT NOVAK)

But, both coaches know that what happened in the past will have little to do with the outcome of the 2020 regular-season finale for both teams.

“They are aware as we have had a couple of guest speakers talk to the team about their experience with this rivalry,” said Niles coach Joe Sassano. “I think the fact that we have the opportunity to play in a game like this is great motivation.”

Brooks and his staff talked to the players, some of whom were not even born yet when the series ended, about the significance of playing against Niles.

“We talked about the rivalry Monday at our meeting,” he said. “The players and coaches are very aware of the rivalry however, some of our players were not even born before the 2005 game.”

The Vikings and Chieftains are nearly mirrored images.

With that being the case, it could be the little things, such as turnovers, penalties and special teams plays, may prove to be the difference.

“We anticipate a low scoring defensive game,” Sassano said. “We have to take care of the football. I expect a hard-fought game to take place, and I know we will get a great effort from our guys. It will be the team that makes the least amount of mistakes, and I believe special teams will play a big part in Friday’s outcome.”

“This season, our offense has struggled mostly with mental errors and missed assignments,” he said. “When you get late in the season and injuries mount, you have to have some flexibility. We are asking players to learn multiple positions in case of emergency, which takes away from the time spent executing their primary position.”

Brooks feels that his team needs to be consistent on both sides of the football.

“For us to be successful, we have to play four quarters of physical football,” he said.

Unlike most of the Niles-Dowagiac games in the series, where the upperclassmen were the stars, Friday night’s game could be dominated by underclassmen like Dowagiac sophomore fullback Malakai Haines, who has rushed for 362 yards in the first four games for an average of 90.5 yards per contest. Haines’ best game of the season came against Sturgis when he ran for 111 yards on 28 carries.

Do not expect the Chieftains to put the ball in the air against the Vikings. Dowagiac is 0-for-6 with two interceptions on the season.

On defense, the Chieftains have had numerous players step up, like Deny White, Terrance Price and Brayan Paredes.

Niles also has some youngsters on offense in freshman quarterback Talon Brawley and running back Julian Means-Flewellen.

Junior Colin Hess is a two-way player for the Vikings, who has had some big games on both sides of the ball. He had 6.5 tackles against Buchanan last week, while on offense, he rushed for 120 yards on 20 carries in the victory over Kalamazoo Loy Norrix.

Kickoff is set for 7 p.m. The game can be seen live for free by going to nfhsnetwork.com/users/sign_up.

Niles radio broadcast can also be accessed by RCSportscasting.com, with James Bowker on the microphone. The game will also be broadcast on the Dowagiac Chieftain Network online with Pat Bakeman and Shawn Williamson on the call.

NOVAK: The Niles-Dowagiac series not for the faint of heart

Growing up in Decatur, I did not know a lot about the Niles-Dowagiac football series until I joined the staff... read more