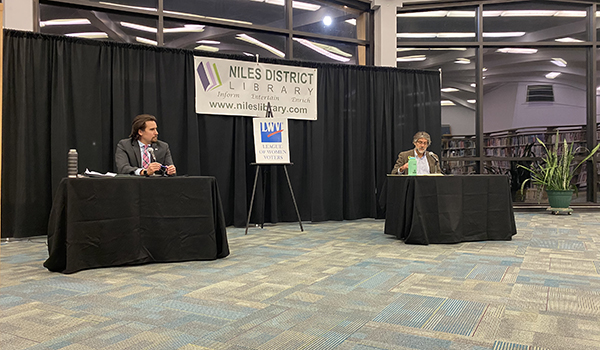 NILES — Two candidates running for a seat in the Michigan House of representatives faced off Tuesday.

Incumbent Brad Paquette, R, and challenger Dan Vandenheede, D, took part in a community forum hosted by the League of Women Voters and Leader Publications Tuesday at the Niles District Library. The candidates are running for representative of the 78th District, which includes roughly 90,000 residents from parts of Berrien and Cass counties. During the forum, the two former teachers — Paquette from Niles Community Schools and Vandenheede from Dowagiac Union Schools — shared their platforms and answered questions submitted by the League and community.

Paquette, who has been state rep since 2018, was the first to lead the debate in introductions. He said education reform was his number one priority, which is why he initially ran for office.

“I always ask if we can’t better our system of education, who is going to?” he asked. “It’s an honor and a blessing to be here.”

Following was Vandenheede’s introduction. The current Niles City Council member detailed his experience with public service. He said he was inspired to run for office due to defunding he has seen come from the Republican-led legislature.

“We are here to decide who will be the best candidate to represent Michigan’s 78th district, and I am confident I am that person,” Vandenheede said. “I grew up here, and I have roots deep here.”

During the debate, several issues important to voters were brought up, including roads, access to broadband internet and climate change. However, the most discussed item was the ongoing COVID-19 pandemic and its effect on both jobs and healthcare.

The following question was posed to VandenHeede: Michigan expects to see an increase in COVID-19 infections as the year processes. If you are elected, what steps would you take, if any, to support to address the impact of this increase economically and in terms of healthcare?

In his response, Vandenheede criticized Paquette’s, and other Republican’s, efforts to strip Gov. Gretchen Whitmer of her emergency powers during the COVID-19 pandemic. Vandenheede said he supported Whitmer’s actions regarding public health during the pandemic.

In a rebuttal, Paquette said he believed Whitmer overstepped her emergency powers and did not work with the legislature to develop solutions to the pandemic.

Another COVID-19 question was posed to Paquette: The pandemic has resulted in reports of an unusual number of people losing their jobs. Do you believe this is the case in Michigan, and if so, if you are elected, what steps would you propose to address Michigan unemployment?

Paquette said he has heard from hundreds of his constituents throughout the pandemic who have lost their jobs and have had difficulty receiving unemployment checks. In response, he said he has worked to expand unemployment benefits and find ways to support small businesses.

“This is one of the reasons I have been such a vocal advocate against the governor and one person making decisions because these stories have literally broken my heart,” he said. “The coronavirus is not going away. The cases are going up, and this is something that is going to stay with us for a time until a vaccine is put out.”

In his rebuttal, Vandenheede said he supported long-term employment solutions, such as free education for frontline pandemic workers.

“We need to be investing in our education, making colleges more affordable, as well as trade schools and so forth,” he said.

In their closing statements, both candidates reaffirmed their political stances and their commitment to the 78th District.

Going first, Vandenheede said he respected Paquette but was disappointed by his voting record and believed he was too conservative for the 78th district.

“That is the distinct difference between us, you have someone [Paquette] who believes the government is a problem, and I think the government can be part of the solution,” Vandenheede said. “Right now, we need a lot of solutions.”

Paquette’s closing statement followed, closing out the evening. He said that if he were to be reelected, he would continue to work for his constituents and listen to people from all across the political and social spectrum.

“These past two years, it’s been an honor to serve the constituents of the 78th district,” Paquette said. “If I am blessed to serve another two, I will do so wholeheartedly and with integrity.”

A full video of the debate can be viewed on the Niles Daily Star Facebook page or the League of Women Voters of Berrien and Cass County YouTube channel.