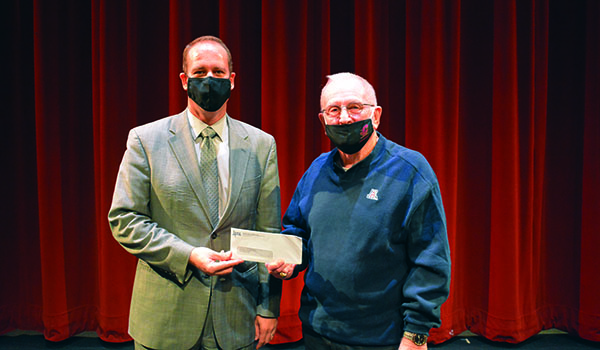 Superintendent Jonathan Whan and Board of Education president Larry Schmidt pose with the $28,000 check donated by Don and Joan Lyons Monday at Dowagiac Middle School. The donation will be applied to the costs of the Chris Taylor fence and pillar project, which was completed earlier this year. (Leader photo/MAXWELL HARDEN)

DOWAGIAC — Don and Joan Lyons donated $28,000 to Dowagiac Union Schools during the district’s board of education meeting Monday at Dowagiac Middle School.

The donation will be applied to the costs of the Chris Taylor fence and pillar project, which was completed earlier this year.

Lyons, the mayor of Dowagiac and former president of Lyons Industries, said the donation was nothing more than the fulfillment of a promise he made to the district regarding the new fencing surrounding Chris Taylor Alumni Field.

“I told myself 40 years ago that, if the circumstances ever allowed it, I would do everything I could to replace that fence along M-62,” Lyons said. “One of the first conversations that I had with [Superintendent Jonathan Whan] was regarding that. ‘If I were to come to the table with a substantial sum of money, is there something we could do?’ He told me that with the kind of money I was talking about, they could put a fence around the entire field, not just M-62. So we did.”

During his speech, Lyons talked about the sense of loss he had felt when the fence near M-62 was replaced with a less expensive fence roughly 40 years ago.

DUS Board of Education president Larry Schmidt thanked Lyons for his donation and was equally impressed with the way the project turned out.

“Several years ago, I stopped at the Marathon gas station across the street from Chris Taylor field,” Schmidt said. “As I was waiting for the gas to go into the car, I looked north and I saw that rotten, crummy fence and that rotten, crummy [ICG Building]. I thought to myself, ‘boy, if those two things could be resolved in a positive way, it would be a beautiful sight to look north over to the high school.’ Little did I know that one day this would happen, so thank you very much.”

Lyons also mentioned that construction on the ICG building parking lot project would begin soon, with materials being brought over to the site in preparation.

Last month, the board voted unanimously to approve its ICG site improvement plan, in which the site of the former ICG building will be home to a new parking lot located between Chris Taylor Alumni Field and the high school campus. The plan is a joint effort between the district and the city of Dowagiac.

In other business, the board reconfirmed its COVID-19 plan, which must be reconfirmed every month.

“This is the monthly action the board of education is required to make as a part of the schooling fund that was passed this fall,” Whan said. “Each month, we will be bringing this to the board to recommit to the plan we set for the district.”

The district’s COVID-19 plan adheres to the guidelines listed in Gov. Gretchen Whitmer’s Safe Schools Return to School Roadmap, which the district will continue to follow despite Whitmer’s executive orders being struck down by the Michigan Supreme Court.

Whan said the plan includes the district’s responses to different scenarios, including having to transition to brief periods of distance learning in the event of new positive COVID-19 cases in the district.

The reconfirmation of the plan, as well as changes to the plan, must be submitted to the Michigan Department of Education each month.

The COVID-19 plan in its entirety can be found on the district’s website.