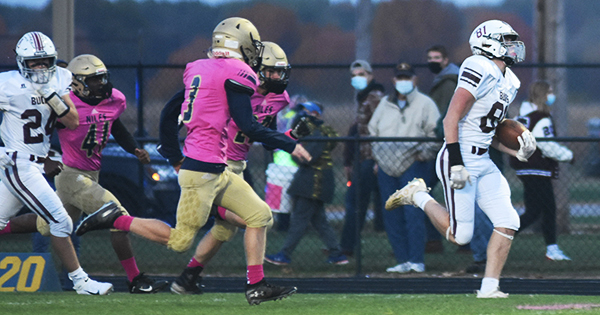 Gavin Fazi heads to the end zone with the first of his three touchdowns in Buchanan’s 19-0 win over Niles Friday night. (Leader photo/SCOTT NOVAK)

NILES — Thirty-nine years seems like a long time to wait to play a team just seven miles away from you. When you add in the fact that Buchanan had not beaten Niles since 1966, you have to wonder what was going through the minds of the visiting Bucks as they struggled to escape with a 19-0 victory over the Vikings Friday night.

Gavin Fazi and Connor LeGault were the stars of the game for the Bucks as the duo hooked up three times for touchdowns. LeGault used a wide receiver screen in the opening two minutes of the contest to give Buchanan a 7-0 lead after Fazi weaved his way through the Niles defense to the end zone 54 yards later.

“I was proud of the way our kids. Period,” said Niles coach Joe Sassano. “That has been how our defense has played all year. People do not drive the ball on us. We give up big plays.”

The score could have been much worse than 7-0 at the end of the first quarter as the Bucks fumbled the ball going in for another score and dropped a touchdown pass. In fact, Buchanan uncharacteristically fumbled the ball away three times and threw an interception. The Bucks also had another touchdown pass dropped in the second half.

“We came out pretty flat,” said second-year Buchanan coach Mark Frey. “Niles defense was determined to stop our run and we had to adjust.”

Neither team really moved the ball effectively in the second quarter, which left the heavily favored Bucks clinging to a 7-0 at halftime.

LeGault and Fazi would give Buchanan some breathing room in the third quarter as they connected for touchdown passes of 33 and 28 yards. Niles was able to block both extra point attempts leaving itself in a position to rally and pull of the upset.

LeGault started the season as the backup quarterback for the Bucks. He stepped into the starting role in the first quarter of the season-opener when Levi Zelmer suffered a knee injury, which returned surgery recently.

“Connor is a great young man and has embraced this challenge,” Each week he continues to grow and improve overall. Tonight, we saw him step up in the pocket and make some big-time throws.”

LeGault ended the night 10-of-22 for 218 yards. Fazi had five of those catches for 139 yards and the three scores.

Still within striking distance, and Buchanan giving the Vikings opportunities with turnovers, Frey had to look to his defense to finish the job. The Bucks did just that against a young and inexperienced Niles offense.

“Our defense has been our strongest part all year,” he said. “Our varsity starters and rotators have only give up one touchdown all year, back in week one. So, it’s been great to see the guys step up even when we had our issues on offense.”

Sassano said that for his offense, every play is a chance to gain experience.

“We are playing with a lot of young kids,” he said. “We only had the service of six seniors on the roster tonight, and only three of them get a lot of playing time.”

While Buchanan was amassing 237 yards of total offense, the Vikings were struggling to finish with 106 yards.

Niles did a solid job against the Bucks’ running duo of Keeghan Pelley and Johnny Rager, holding the two of them to a total of 32 yards on 14 attempts.

The Vikings only ran for 40 yards on 34 carries, while freshman quarterback Talon Brawley was 6-of-16 for 62 yards with a pair of interceptions. Julian Means-Flewellen led the ground game with 36 yards on seven carries.

Besides inexperience, being pinned deep in their own territory much of the night did not help the Niles chances either.

“The field position killed us,” he said. “We just don’t have the explosive offense to get out of that type of whole. With our young team, every snap is a learning down for them.”

After renewing its rivalry with Buchanan after nearly 40 years, the Vikings renew an even bigger one Friday night when Dowagiac comes to town after a 13-year hiatus. Niles and the Chieftains had one of the longest continuous rivalries in the state of Michigan when it stopped in 2005 when the Chieftains joined the Wolverine Conference.

Dowagiac and Niles have played 102 games in the series. The Vikings hold a 49-47-5 advantage on the Chieftains.