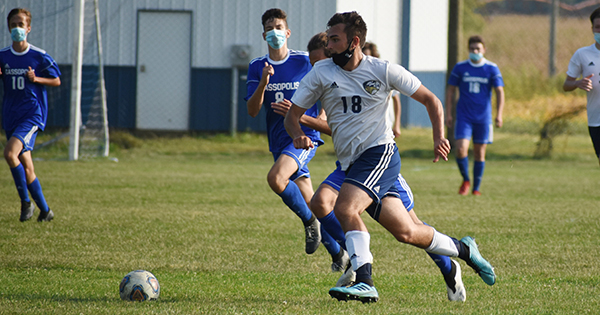 Niles’ Cade Vota is one of three local athletes to be named a finalist for the MHSAA’s Scholar-Athlete Award. (Leader file photo)

VICKSBURG — Cade Vota scored a pair of goals as visiting Niles defeated Vicksburg in the opening round of the Division 2 District soccer tournament Friday.

Vota scored a goal in each half as the Vikings advanced to the district semifinals at 5:30 p.m. on Monday against former SMAC foe St. Joseph. Paw Paw and Three Rivers will square off in the other semifinal with the winners advancing to the title match on Thursday in Vicksburg.

Vota scored the game-winner with a 25-yard curling shot that was assisted on by Casey Marlin as the Vikings went up 2-0.

“The Vikings played with a lot of grit,” said Niles coach Abel Fonseca. “It was a physical game. We had other opportunities [in the first half] that we didn’t finish on.”

Kade Delinski had eight saves for the Vikings. Fonseca also credited his defense for the win.

“The defense was led by Jaden Hainey, who stopped a few goals opportunities for Vicksburg,” he said.